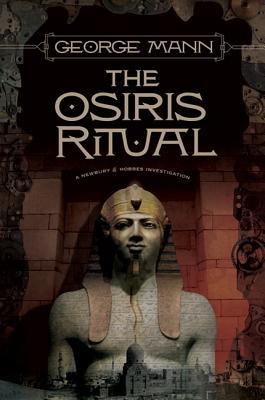 This is book number 2 in the Newbury & Hobbes series.

Sir Maurice Newbury, Gentleman Investigator for the Crown, imagines life will be a little quieter after his dual success in solving The Affinity Bridge affair. But he hasn't banked on the reemergence of his villainous predecessor, Knox, who is hellbent on achieving immortality, and seems to be pursued by a secret agent who isn't quite as he seems....

The whole affair is so baffling that Newbury is reluctant to take time away from it to attend to the mysterious murders in the wake of the unveiling of an Egyptian mummy, let alone his partner Veronica's apparent obsession with tracking the growing pool of young women who have disappeared after being used as props in a magician's stage act. But it's all part of a day's work when your boss is the queen of England.

So begins a thrilling steampunk mystery, the second in the series of Newbury & Hobbes investigations, and a grand adventure quite unlike any other.

“A wonderful penny-dreadful. It's an unashamed galloping romp through the ins and outs of the Victorian metropolis and the lurid generic conventions of adventure fiction. All the way through I felt like George Mann was having a whale of a time with this.” —Paul Magrs, author of several Doctor Who novels and a Carnegie Medal finalist, on The Osiris Ritual

“ Newbury and Hobbes make a charming pair, and their investigative adventures are a great deal of fun. Mann's reimagined Victorian era is a fabulous place, and the mix of pea-soup fog, zombies, and clockwork automata makes for an excellent detective story. Let us hope to see more of Hobbes and Newbury.” —Booklist on The Affinity Bridge

“ [An] intriguingly bizarre version of 1901 L ondon…a strong addition to the ‘steampunk' subgenre and one that creates a lively alternative world.” —Library Journal on The Affinity Bridge