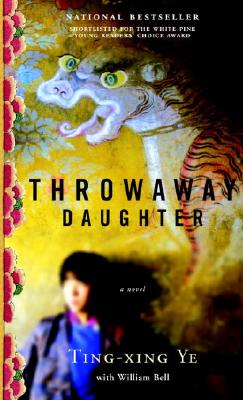 
Currently Unavailable
A dramatic and moving YA novel by Ting-xing Ye, the internationally acclaimed author of A Leaf in the Bitter Wind, working with her husband, William Bell, author of the award-winning novels for young adults Forbidden City, Zack, and Stones.
.
Throwaway Daughter tells the dramatic and moving story of Grace Dong-mei Parker, a typical Canadian teenager until the day she witnesses the Tiananmen massacre on television. Horrified, she sets out to explore her Chinese ancestry, only to discover that she was one of the thousands of infant girls abandoned in China since the introduction of the one-child policy, strictly enforced by the Communist government. But Grace was one of the lucky ones, adopted as a baby by a loving Canadian couple.

With the encouragement of her adoptive parents, she studies Chinese and travels back to China in search of her birth mother. She manages to locate the village where she was born, but at first no one is willing to help her. However, Grace never gives up and, finally, she is reunited with her birth mother, discovering through this emotional bond the truth of what happened to her almost twenty years before.
Ting-xing Ye, born in Shanghai in 1952, was an English interpreter for the Chinese government before leaving China in 1987. Her memoir, A Leaf in the Bitter Wind, has been published in nine countries. She is also the author of three children’s picture books and the award-winning White Lily. She lives in Orillia, Ontario.