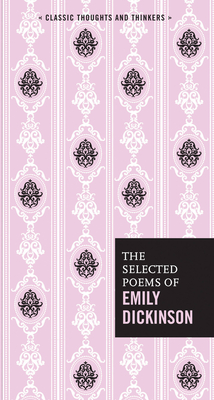 Emily Elizabeth Dickinson was born in Amherst, Massachusetts on December 10,1830, to a prominent family of academics, lawyers, and statesmen. Following her education at Amherst Academy and Mt. Holyoke Female Seminary, Dickinson embarked on her impassioned journey as a poet. Composing first in a fairly conventional style, the poetess soon began to experiment with her writing; her frequent use of dashes, sporadic capitalization of nouns, broken meter, and idiosyncratic metaphors made her work unparalleled for its time.

Dickinson's poetry dealt not only with issues of death, faith, and immortality, but with nature, domesticity, and the power of language to transfer emotions into written text. An obsessively private writer, only ten of her some 1,700 poems were published during her lifetime. Dickinson withdrew from social contact at the age of 23 and devoted herself to writing in secret. It wasn't until her death in 1866 that the scope of Dickinson's work was realized, when her sister Lavinia found her prolific collection in a dresser drawer.

Since this time, Emily Dickinson's writing has had significant influences on modern American poetry; her complex use of language and form has contributed to her reputation as one of the most innovative poets of the 19th century. This collection of some of her finest works illustrates not only Dickinson's talent as a writer but her profound love of language, nature, and life.

In the series Classic Thoughts and Thinkers, explore some of the most influential texts of our time along with the inner workings of its greatest thinkers. With works from great American figures such as Theodore Roosevelt and Emily Dickinson and seminal documents including the Constitution of the Unites States, this series focuses on the most reflective and thought-provoking writings of the last two centuries. These beautiful hardcovers are the perfect historical perspective for meeting the challenges of the modern world.
​
Other titles in this series include: As a Man Thinketh, Autobiography of Benjamin Franklin, Collected Poems of Robert Frost, Common Sense, Constitution of the United States with the Declaration of Independence, Helen Keller, Narrative of the Life of Frederick Douglass, and Theodore Roosevelt’s Words of Wit and Wisdom.

Emily Dickinson was an American poet whose writing was heavily influenced by the Metaphysical poets of seventeenth-century England, as well as her reading of the Book of Revelation and her upbringing in a Puritan New England town. In addition to poetry, Dickinson had a passion for baking and botany, and became reclusive later in life. While Dickinson was extremely prolific as a poet and regularly enclosed poems in letters to friends, she was not publicly recognized during her lifetime. The first volume of these works was published in 1890, well after her death in 1886. A full compilation, The Poems of Emily Dickinson, wasn’t published until 1955, though previous iterations had been released. Dickinson has since been regarded as one of the most important figures in American poetry.