You Can Prevent a Stroke (Paperback) 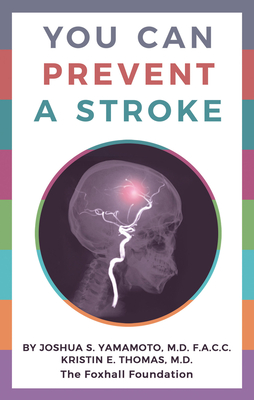 You Can Prevent a Stroke (Paperback)

100,000 heartbeats a day means a lot of wear and tear over the years. Now two doctors explain how to lower the risk of a stroke as you age.

Natural aging leads to artery plaque, high blood pressure, and slower and irregular heartbeats. You can do everything right, but while you can influence some aspects of aging on your own, some you cannot-at least not without your doctor's help. Fortunately, the biology of aging is no longer mysterious. Heart and blood vessel health is knowable, measurable, and manageable.

In You Can Prevent a Stroke, Dr. Joshua Yamamoto and Dr. Kristin Thomas help us understand what we can do, and what we can ask of our doctors, to manage the effects of aging on our circulation so that we do not have a stroke. Drawing on fundamentals learned at The Johns Hopkins Hospital, they offer principles and preventative steps that aren't one-size-fit-all solutions or magical cures-just solid science to help anyone manage the natural processes that affect us all. Included is information on:

- Establishing a relationship with a physician

- Knowing the health of your heart

- Knowing the health of your arteries

- Knowing the regularity of your heartbeat

- Knowing if it's time to take a medicine to prevent plaque in your arteries, and whether you need a pill to prevent a blood clot

Strokes can be avoided-and You Can Prevent a Stroke explains how.

​Dr. Joshua S. Yamamoto was born in Washington, DC. He graduated with a degree in physics from Princeton University, and subsequently worked as a paramedic for the Alexandria City Fire Department before attending Dartmouth Medical School. He too trained on the Osler Medical Service at The Johns Hopkins Hospital, and then completed cardiology training at the National Naval Medical Center and Georgetown University. He was the cardiology consultant to the US Congress, Director of Cardiac Imaging, and held a faculty appointment at the Uniformed Services University. In 2005, he was lent to the Army and served in Kuwait as the theater cardiologist for the ongoing wars in Iraq and Afghanistan. Upon his return, he dutifully followed orders and joined his wife in private practice. Dr. Kristin Thomas is a Michigan native who graduated with a degree in American history from the University of Michigan, and subsequently earned her medical degree there as well. She did her internship and residency on the Osler Medical Service at The Johns Hopkins Hospital. Upon completion of her training, she became the first "hospitalist" physician of Johns Hopkins before accepting the position of Assistant Chief of Service (Chief Resident). She gave up a promising academic career in the department of medicine at Johns Hopkins in order to marry a naval officer stationed at the National Naval Medical Center in Bethesda, Maryland. She then agreed to work with a prominent private medical practice in Washington, DC. Her husband joined her several years later when the two formed their own practice, Foxhall Medicine, PLLC. She has long been dedicated to the care of her patients and has watched them age, some more gracefully than others. In 2015, she started the Foxhall Foundation, which initially worked to help provide services for patients with dementia. The Foxhall Foundation The Foxhall Foundation is a not-for-profit organization dedicated to helping everyone age well. It was started in 2015 to help families take care of patients with dementia in the Washington, DC, area. It became evident that as we age, so much of dementia is a result of the brain damage related to strokes. So much of this damage was readily avoidable, and indeed preventable, but neither the general population nor their physicians had thought of strokes as being something that could, and should, be actively prevented. After its inception, the Foundation began a program on stroke prevention. Foundation members give dozens of lectures and presentations on stroke prevention a year to physicians and the community. These efforts led to this book, which represents a summary of the conversations we have with patients and colleagues every day. All proceeds from the sales of this book go to support the Foundation. For more information, go to: foxhallfoundation.org.