The Zanzibar Chest: A Story of Life, Love, and Death in Foreign Lands (Paperback) 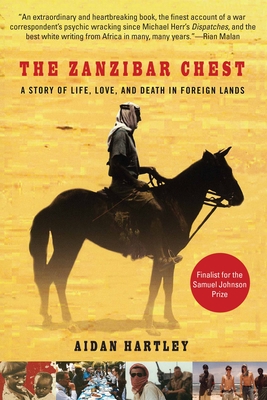 The Zanzibar Chest: A Story of Life, Love, and Death in Foreign Lands (Paperback)


Available at One of Our Locations
Combining literary reportage, memoir, family history, and a quest to piece together a decades-old mystery, The Zanzibar Chest is a moving examination of colonialism and its consequences. In his final days, Aidan Hartley's father said to him, "We should have never come." Those words spoke of a colonial legacy that stretched back through four generations of one British family. From a great-great-grandfather who defended British settlements in nineteenth-century New Zealand, to his father, a colonial officer sent to Africa in the 1920s and who later returned to raise a family there--these were intrepid men who traveled to exotic lands to conquer, build, and bear witness. And there is Aidan, who becomes a journalist covering Africa in the 1990s, a decade marked by terror and genocide. After encountering the violence in Somalia, Uganda, and Rwanda, Aidan retreats to his family's house in Kenya where he discovers the Zanzibar chest his father left him. Intricately hand-carved, the chest contained the diaries of his father's best friend, Peter Davey, an Englishman who had died under obscure circumstances five decades before. With the papers as his guide, Hartley embarked on a journey not only to unlock the secrets of Davey's life, but his own.
Aidan Hartley was born in 1965 and brought up in East Africa. He read English at Oxford and studied politics at London University. He joined Reuters as a foreign correspondent and worked in the Balkans, the Middle East, and Russia. He now writes a column for the Spectator (UK). He lives with his family in Kenya.