The Hungry Gene: The Inside Story of the Obesity Industry (Paperback) 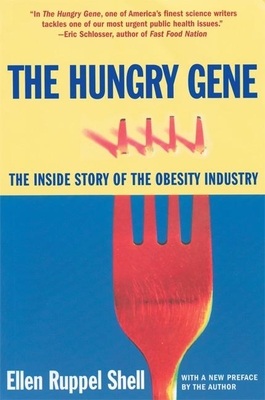 The Hungry Gene: The Inside Story of the Obesity Industry (Paperback)


Currently Unavailable
In a rare blend of erudition and entertainment, acclaimed science journalist Ellen Ruppel Shell reveals the secret history and subtle politics behind the explosion of obesity. Shell traces the epidemic's inception in the Ice Age, its rise during the Industrial Revolution, and its growth through the early days of medicine and into modernity. She takes readers to the front lines of the struggle to come to grips with this baffling plague -- from a children's food marketing convention, to the cutthroat race to find the obese gene, to a far-flung tropical island, where a horrifying outbreak of obesity has helped unravel the disorder's genetic and evolutionary roots. Offering an unflinching insider's look into the radical and controversial surgical and pharmacological approaches used to combat what drug makers have dubbed the trillion-dollar disease, Shell takes aim at the collusion of industry and government that lies behind the crises and shows conclusively that obesity is not a matter of gluttony or weak will, but of an increasingly greedy culture preying on vulnerable human biology. Gripping and provocative, The Hungry Gene is the unsettling saga of how the world got fat -- and what we can do about it.