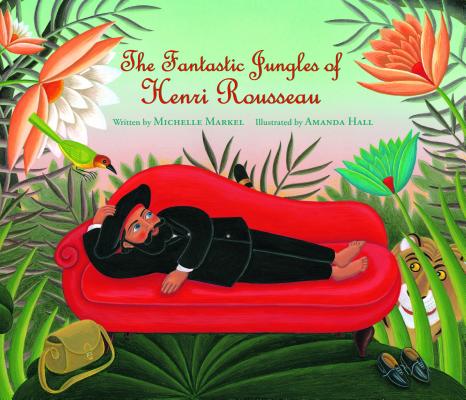 
Ships to Our Store in 1-5 Days
Henri Rousseau wanted to be an artist. But he had no formal training. Instead, he taught himself to paint. He painted until the jungles and animals and distant lands in his head came alive on the space of his canvases. Henri Rousseau endured the harsh critics of his day and created the brilliant paintings that now hang in museums around the world. Michelle Markel's vivid text, complemented by the vibrant illustrations of Amanda Hall, artfully introduces young readers to the beloved painter and encourages all readers to persevere despite all odds. Watch the trailer:

Michelle Markel is the author of many children's books, includingTyrannosaurus Math (Tricycle/Random House) and Dreamer from the Village: The Story of Marc Chagall (Henry Holt). Michelle lives in California. Visit her website at www.michellemarkel.com. Amanda Hall has illustrated a number of picture books, including The Fantastic Jungles of Henri Rousseau (Eerdmans), which won the PEN/Steven Kroll Award. Amanda lives in England. Visit her website at www.amandahall-illustration.com.