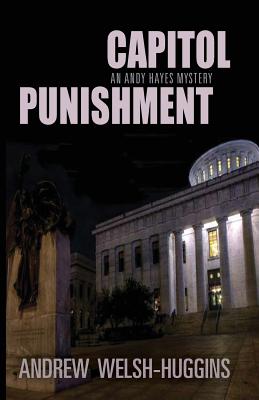 The job seems simple enough: Reporter Lee Hershey needs protection for a couple of weeks as he pursues the biggest story of his career with all eyes on swing state Ohio in the midst of a presidential election. Columbus private eye Andy Hayes, broke as usual, doesn’t have much choice but to sign on, even with his girlfriend falling for the charming journalist.

Then murder strikes at the Statehouse and Andy finds himself partly responsible for the death. With an innocent man behind bars, a mysterious vehicle following Andy around the city, and more lives in danger, the detective has his hands full trying to solve a killing in a poisonous political environment where everyone has a motive for murder and anyone could be the next target.

Andrew Welsh-Huggins is a reporter for the Associated Press in Columbus, Ohio, and the Nero Award–finalist author of seven mysteries from Swallow Press featuring Andy Hayes, a former Ohio State and Cleveland Browns quarterback turned private eye. Welsh-Huggins is also the editor of Columbus Noir (Akashic Books) and his short fiction has appeared in publications including Ellery Queen Mystery Magazine, Mystery Weekly, and Mystery Tribune. His nonfiction book No Winners Here Tonight (Ohio University Press) is the definitive history of the death penalty in Ohio.

“Hayes’ beer isn’t the sole heady brew in this fine example of political noir, for which aficionados of smart crime fiction will vote with enthusiasm.”—Jay Strafford, Richmond Times-Dispatch

“Capitol Punishment is an entertaining private eye novel…Andy is a likable, cynical, at times humorous, and always witty protagonist with a penchant for trouble.”—Mystery Scene

“Capitol Punishment is an entertaining private eye novel…Andy is a likable, cynical, at times humorous, and always witty protagonist with a penchant for trouble.” —Mystery Scene

“Convoluted clues are at the heart of this political mystery that roves all around Columbus, including German Village and even Clintonville. It's a great read for this tense political season.”
—The Columbus Dispatch

“[Welsh-Huggins] understands the darker places of the human heart. Capitol Punishment is a winner, and if you know Columbus, you will have fun following Andy Hayes through his city ramblings as he tracks the killer.”
—Reviewing the Evidence

“Capitol Punishment is an entertaining private eye novel…Andy is a likable, cynical, at times humorous, and always witty protagonist with a penchant for trouble. The narrative includes a bunch of interesting Ohio political history and anecdotes…while never slowing the story.” —Mystery Scene