The Conservatarian Manifesto: Libertarians, Conservatives, and the Fight for the Right's Future (Hardcover) 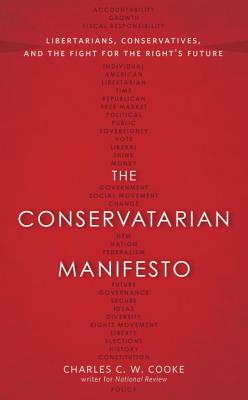 A call to arms for the growing movement of "Conservatarians"--members of the right who are fiscally conservative but socially liberal--and a fascinating look at conservatism's past and future. There is an underserved movement budding among conservatives, in which fiscal responsibility, constitutional obedience, and controlled government spending remain crucial tenets, but issues like gay marriage and drug control are approached with a libertarian bent. In The Conservatarian Manifesto, Charles C.W. Cooke engages with the data and the philosophy behind this movement, applauding conservatarianism as a force that can help Republicans mend the many ills that have plagued their party in recent years. Conservatarians are vexed by Republicans' failure to cut the size and scope of Washington D.C., but they are critical of some libertarians for their unacceptable positions on abortion, national defense, and immigration. They applaud conservatives' efforts to protect Second Amendment rights--efforts that have recently been wildly successful--but they see the War on Drugs as an unmitigated disaster that goes against everything conservatives ought to value. All movements run the risk of stagnation, and of losing touch with the principles and values that made them successful in the first place. In this book, Charles Cooke shows the way back to a better and more honest conservatism that champions limited government, reality-based policy, and favor for the smallest minority of all: the individual.

CHARLES C.W. COOKE is a writer at National Review and a graduate of the University of Oxford, at which he studied modern history and politics. His work has focused especially on Anglo-American history, British liberty, free speech, the Second Amendment, and American exceptionalism. Charles is the cohost of the Mad Dogs and Englishmen podcast, and has broadcast for HBO (Real Time with Bill Maher), BBC, MSNBC, Fox News, The Blaze, CNBC, CTV, ABC, Sun News, and CBS. In addition to National Review, his writing has also been published by the New York Times, National Interest, the Washington Times, and the New York Post.