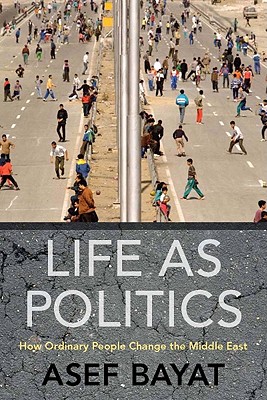 In the popular imagination, the Muslim Middle East is frozen in its own traditions and history--a land of mosques and minarets, veiled women, despotic regimes, and desert sand. But this assumption fails to recognize that social and political change comes in many guises. In this eye-opening book, Asef Bayat reveals how under the shadow of the authoritarian rule, religious moral authorities, and economic elites, ordinary people can make meaningful change through the practices of everyday life.
Though not as visible on the world-stage as a mass protest or a full-scale revolution, millions of people across the Middle East are discovering or creating new social spaces within which to make their claims heard. The street vendor who sets up his business in the main square, squatters who take over public parks, Muslim youth who frequent public hangouts in blue jeans, and protestors who march in the streets, poor housewives who hang their wash in the alleyways, and educated women who pursue careers doing "men's work"--all these people challenge the state's control and implicity question the established public order through their daily activities. Though not coordinated in their activities, these "non-movements" offer a political response, not of protest but of practice and direct daily action.
Offering a window into the complex social processes in a too-often misunderstood part of the world, this unique book provides a much-needed Middle Eastern perspective on global debates over the meaning of social movements and the dynamics of social change.

Asef Bayat is Professor of Sociology and Middle Eastern Studies and holds the Chair of Society and Culture of the Modern Middle East at Leiden University, the Netherlands. He is the author of Making Islam Democratic: Social Movements and the Post-Islamist Turn (Stanford, 2007) and Street Politics: Poor People's Movements in Iran (1997).

"The strengths of this book are numerous. Bayat successfully contributes to scholarship that situates the Arab Middle East in relation to its own specific social contexts, but also in intimate connection to world history and politics. In demonstrating how the region's people are already inducing and impelling change within the authoritarian social structures that shape their societies, Bayat neither absolves local citizens of the necessity to practice progressive politics nor fails to place appropriate attention to the externally driven economic imperatives that both hinder and help regional possibilities for such political action. Finally, in elucidating how local political agency and social change take their own shape and logic, Life as Politics provides an informed and hopeful voice for the position that sociopolitical alternatives to silence and violence in the Middle East will be initiated and increasingly practiced by ordinary active citizenries of the region or they will risk failing to take root at all."—Avi Goldberg, Vanier College, Canadian Journal of Sociology

"Bayat is an innovative urban social movement theorist whose field research has contributed to a better understanding of social change in the Middle East and the theoretical significance of bottom-up movements as opposed to top-down organized political change ... Highly recommended."—A. Mahdi, CHOICE

"If we are serious about meaningful change in the Middle East, we need to be aware of the ways people come together, share, and support each other in poor, urban Middle Eastern neighborhoods. In this pioneering book, Bayat forces us to see things from the ground up. Rather than focus on conflict, he highlights the unseen, ordinary ways people deprived of rights and avenues of protest continue to create opportunities."—Kamran Asdar Ali, University of Texas at Austin

"This extraordinary book offers real insights into little-explored issues like youth, fun, and social movements in the Middle East. It will definitely force a major rethinking of conventional understandings of Muslim-Christian relations, Islamist politics, women's activism, and Middle East 'exceptionalism.' It's truly one of the most important contributions to the field in the past decade."—Ted Swedenburg, University of Arkansas

"Life as Politics provides a strategy through which to recognize the multiple ways that large numbers of urban residents across the Arab World deploy common practices to reshape the everyday conditions of urban life and re-socialize prevailing institutions of governance. Bayat tunnels across the familiar demarcations of territory, social attribution, and political identity to detail collective forces of 'ordinary people' using assumptionsof shared interests and background to implicitly act in concert, and without self-conscious mobilization. Instituting themselves in urban public spaces with the courage to act despite constraint, these forces materialize incremental openings and opportunities for residents to demonstrate ways in which disparate facets of life can be assembled, particularly through thediverse ways in which Islam is put to work. As such this is an enormously valuable contribution to how we think about urban life and what it ispossible to do with it."—AbdouMaliq Simone, Goldsmiths, University of London