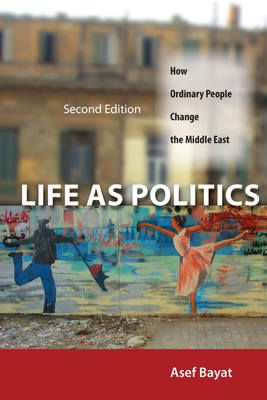 
Ships to Our Store in 1-5 Days
(This book cannot be returned)
Prior to 2011, popular imagination perceived the Muslim Middle East as unchanging and unchangeable, frozen in its own traditions and history. In Life as Politics, Asef Bayat argues that such presumptions fail to recognize the routine, yet important, ways in which ordinary people make meaningful change through everyday actions. First published just months before the Arab Spring swept across the region, this timely and prophetic book sheds light on the ongoing acts of protest, practice, and direct daily action. The second edition includes three new chapters on the Arab Spring and Iran's Green Movement and is fully updated to reflect recent events. At heart, the book remains a study of agency in times of constraint. In addition to ongoing protests, millions of people across the Middle East are effecting transformation through the discovery and creation of new social spaces within which to make their claims heard. This eye-opening book makes an important contribution to global debates over the meaning of social movements and the dynamics of social change.
Asef Bayat is the Catherine and Bruce Bastian Professor of Global and Transnational Studies and Professor of Sociology at the University of Illinois at Urbana-Champaign. He is the author of Making Islam Democratic: Social Movements and the Post-Islamist Turn (Stanford, 2007).

Praise for the first edition
"Asef Bayat has penned a remarkable study. Life as Politics should be a mandatory read for any journalist, scholar or politician who has never been to the Middle East."—Arab News

Praise for the first edition
"When Life as Politics was published..., Asef Bayat's arguments on grassroots dynamism as the harbinger of democratic transformations in the Arab world seemed a utopian hope. Barely a year later, as events of the 2011 Arab Spring continue to unfold, his critical insights on everyday forms and spaces of political activity in the region have become prescient."—Contemporary Sociology