The Monster at Our Door: The Global Threat of Avian Flu (Paperback) 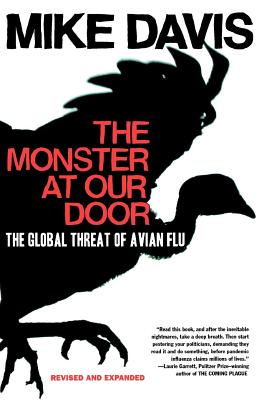 The Monster at Our Door: The Global Threat of Avian Flu (Paperback)

Award-winning writer, urban theorist, and historian Mike Davis presents an investigation of the looming avian flu pandemic—and an in-depth exploration of how we arrived at the brink of a global health catastrophe.

The virus known as H5N1 is now endemic among poultry and wild bird populations in East Asia. A flu strain of astonishing lethality, it has a talent for transforming itself to foil the human immune system—and kills two out of every three people it infects. The World Health Organization now warns that avian flu is on the verge of mutating into a super-contagious form that could travel at pandemic velocity, killing up to 100 million people within two years.

In The Monster at Our Door, the first book to sound this alarm, our foremost urban and environmental critic reconstructs the scientific and political history of this viral apocalypse in the making, exposing the central roles played by burgeoning slums, the agribusiness and fast-food industries, and corrupt governments. Mike Davis tracks the avian flu crisis as the virus moves west and the world remains woefully unprepared to contain it. With drug companies unwilling to invest in essential vaccines, severe shortages persist, a scenario Davis compares to the sinking Titanic: there are virtually no lifesaving resources available to the poor, and precious few for the rich, too.

“Brilliant…[Davis’s] chapter explaining the virus’s avidity for mutation is among the finest 10 pages of science journalism you are ever likely to read…[The Monster at Our Door] goes on to sketch a history of influenza from the 1918 outbreak to the present, addressing all the complex factors playing into the risk of a pandemic today…Fascinating.”—The New York Times

Historian Mike Davis, “America’s most incendiary urban critic,” (London Review of Books) is the author of many books, including the bestselling City of Quartz and Ecology of Fear. The recipient of a MacArthur Fellowship and a professor at the University of California at Irvine, Davis lives in San Diego.
“Read this book, and after the inevitable nightmares, take a deep breath. Then start pestering your politicans, demanding they read it and do something, before pandemic influenza claims millions of lives” —Laurie Garrett, Pulitzer Prize–winning author of The Coming Plague