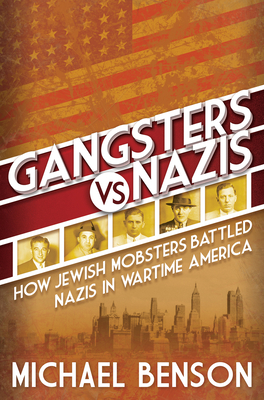 
Available at One of Our Locations
The stunning true story of the rise of Nazism in America in the years leading to WWII—and the fearless Jewish gangsters and crime families who joined forces to fight back. With an intense cinematic style, acclaimed nonfiction crime author Michael Benson reveals the thrilling role of Jewish mobsters like Bugsy Siegel in stomping out the terrifying tide of Nazi sympathizers during the 1930s and 1940s.


As Adolph Hitler rose to power in 1930s Germany, a growing wave of fascism began to take root on American soil. Nazi activists started to gather in major American cities, and by 1933, there were more than one-hundred anti-Semitic groups operating openly in the United States. Few Americans dared to speak out or fight back—until an organized resistance of notorious mobsters waged their own personal war against the Nazis in their midst. Gangland-style. . . .

In this thrilling blow-by-blow account, acclaimed crime writer Michael Benson uncovers the shocking truth about the insidious rise of Nazism in America—and the Jewish mobsters who stomped it out. Learn about:

* Nazi Town, USA: How one Long Island community named a street after Hitler, decorated buildings with swastikas, and set up a camp to teach US citizens how to goosestep.

* Meyer Lansky and Murder Inc.: How a Jewish mob accountant led fifteen goons on a joint family mission to bust heads at a Brown Shirt rally in Manhattan.

* Fritz Kuhn, “The Vest-Pocket Hitler”: How a German immigrant spread Nazi propaganda through the American Bund in New York City—with 70 branches across the US.

* Newark Nazis vs The Minutemen: How a Jewish resistance group, led by a prize fighter and bootlegger for the mob, waged war on the Bund in the streets of Newark.

Packed with surprising, little-known facts, graphic details, and unforgettable personalities, Gangsters vs. Nazis chronicles the mob’s most ruthless tactics in taking down fascism—inspiring ordinary Americans to join them in their fight. The book culminates in one of the most infamous events of the pre-war era—the 1939 Nazi rally in Madison Square Garden—in which law-abiding citizens stood alongside hardened criminals to fight for the soul of a nation. This is the story of the mob that’s rarely told—one of the most fascinating chapters in American history and American organized crime.
Michael Benson is the author of more than sixty books, including the nonfiction history and crime titles Gangsters vs Nazis, Betrayal in Blood, Killer Twins, Mommy Deadliest, Who’s Who in the JFK Assassination, and The Devil at Genesee Junction. He is the co-author, along with Frank Dimatteo, of the acclaimed American Mafia history books Carmine the Snake, Mafia Hit Man, and Lord High Executioner. He regularly appears on ID: Investigation Discovery channel and is the recipient of the Academy of American Poets Award. Benson lives in New York and can be found on Facebook @authorMichaelBenson.

Advanced Praise for Gangsters vs. Nazis

“Michael Benson’s nonfiction masterpiece Gangsters vs. Nazis reads like speculative fiction at its very best, even though the incidents the book portrays are very much real.  ….One of the most rivetingly relevant reads I’ve ever encountered, chock-full of real-life heroes and villains who are every bit the match for the best that thriller fiction has to offer.” —Jon Land, Providence Journal

“It is a colorful tale. It reads in many places like a mid-20th century Jimmy Cagney movie or Mickey Spillane novel come to life. It occurs in the same settings and the author uses the Runyonesque language of the genre. The mobsters deal out knuckle sandwiches and whack foes on the noggin. At one point Benson urges readers to think of one team as “The Dirty Dozen with some Yiddish thrown in.” —Ricochet

“Benson tells this little known chapter of American Jewish history well and with passion.  The prose is colorful and direct.” —New York Journal of Books

“Told in a colorful, Runyonesque style, the tale is about one of the strangest campaigns of the late 1930s. It shows how the Jewish American community organized to fight the German American Bund and other fascist groups in the United States in the years prior to America’s entry into World War II. To break up Nazi rallies and bust heads, the community enlisted Jewish gangsters, the author claims—not “good guys” protecting the American way. This is a fascinating and entertaining read.” —The Epoch Times

“From indoctrinating youth camps to jack-booted rallies promoting Adolf Hitler, pre-World War II America was threatened by the rise of Nazism. Gangsters vs. Nazis is a must-read, eye-opening account that brings to life the violent struggle between these home-brewed storm troopers and an army of unlikely patriots; gangs of fist-swinging Jewish mobsters willing to break bones and crack heads in order to turn back the Nazi menace.” —Larry Alexander, New York Times bestselling author of Biggest Brother: The Life of Major Dick Winters, the Man Who Led the Band of Brothers

“Benson is a master of true crime.” —Robert Scott

“Difficult to put down...This is one that I highly recommend.” —True Crime Book Reviews on Watch Mommy Die