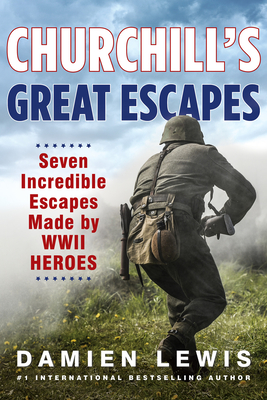 
Currently Unavailable
From #1 internationally bestselling author, war reporter, and award-winning historian Damien Lewis, the thrillingly-told stories of the seven most daring WWII escapes executed by the legendary British fighting force known as the Special Air Force or SAS, a unit that specialized in raids and answered to Churchill.


No food. No water. Out of ammo. Hunted and on the run. The dreaded certainty of discovery looming between recapture and safe haven. What would you do? Give up? For the seven heroes of Churchill’s Great Escapes the answer was simple: keep moving against all odds. These are the extraordinary stories of the bravery and endurance of the men of SAS, legendary pioneers of escape and evasion who, through the darkest of days and nights of World War II, endeavored and succeeded in slipping through the clutches of the enemy.

From the earliest years of the war to its explosive closing stages readers are plunged into the dark heart of Mussolini’s Fascist Italy, held captive in a heavily fortified POW camp in Greece and in the coastal fortress of Tobruk in Occupied Libya. Whether scaling the treacherous war-torn Vosges Mountains in France or crossing one hundred and fifty miles of sun-blasted Sahara Desert crawling with General Ernst Rommel’s fearsome Afrika Korps, it took cunning, incredible courage and die-hard fearlessness to pull off these exhilarating escapes. Based upon in-the-moment personal diaries and notebooks, mission reports, debriefings and letters, Damien Lewis recounts the most terrifying and adrenaline-fueled days and nights in the lives of men for whom survival was the only option. We follow every desperate step, facing unknowable threats and death around every corner, and share in the breathtaking endurance that brought them freedom against the most formidable of threats: the seemingly invincible Nazi war machine.

An authentically gripping roller-coaster ride, Churchill’s Great Escapes extols the uncommon bravery of these heroes who epitomize the esprit de corps and daring of Britain’s finest elite fighting forces. It is true-life white-knuckle adventure of the highest caliber.
Damien Lewis is an award-winning historian, war reporter, and bestselling author. He spent over two decades reporting from war, disaster, and conflict zones around the world, winning numerous awards. He has written more than a dozen books about World War II, including The Ministry for Ungentlemanly Warfare, The Dog Who Could Fly, SAS Ghost Patrol, and The Nazi Hunters. His work has been published in over forty languages, and many of his books have been made, or are being developed, as feature films, TV series, or as plays for the stage. Visit him online at DamienLewis.com.