Song for Almeyda and Song for Anninho (Hardcover) 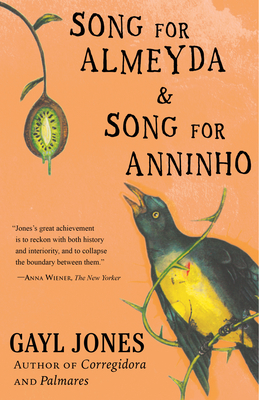 Song for Almeyda and Song for Anninho (Hardcover)


Ships to Our Store in 1-5 Days
“Jones’s great achievement is to reckon with both history and interiority, and to collapse the boundary between them.”—Anna Wiener, The New Yorker

From the highly acclaimed author of Corregidora and The Healing—two epic poems, the love songs of fugitive slaves, set in 17th-century Brazil; continuing the unforgettable journey told in Gayl Jones’s masterwork, Palmares (2021)

Gayl Jones, the novelist Toni Morrison discovered decades ago and Tayari Jones recently called her favorite writer, offers 2 books in one with this volume of poetry. Jones renders the saga of Palmares, a foundational tale in the annals of colonial terrorism and Black resistance, in verse, told in the voices of the characters in her epic novel Palmares.

In the late 17th century, the fugitive slave enclave of Palmares was destroyed by Portuguese colonists. Amid the flight and re-enslavement of Palmares’s inhabitants emerges the love story of Almeyda and Anninho. In Song for Anninho, Almeyda moves between a dark present, in which she is once again enslaved and abused by a terrible captor, and memories of her lover, Anninho, whom she believes to have been killed. Song for Almeyda, released now for the first time, is told in the voices of Anninho and his fellow warriors.

Fans of Corregidora (one of the New Yorker’s “Best Books We Read in 2020” picks), which tracked the legacy of enslavement, and Palmares will especially appreciate these verses. Brimming with intimacy, history, and revolution, the poems collected serve as a declaration of decolonial love.
Gayl Jones was born in Kentucky in 1949. She attended Connecticut College and Brown University, and has taught at Wellesley College and the University of Michigan. Her landmark books include Corregidora, Eva’s Man, The Healing (a National Book Award finalist and New York Times Notable Book of the Year), Palmares (a finalist for the Pulitzer Prize in fiction), and most recently, The Birdcatcher (National Book Award finalist).
“This book’s magic is different than that of its predecessor, yet the spells they cast are comparably powerful.”
—Kirkus Reviews

“These are songs of longing and love, journeys of discovery and wholeness, revelations about trauma’s deep impact on body and soul, and simultaneous declarations of resistance and acceptance. Readers enthralled by Palmares will enjoy the added dimensions here, while others will be moved by the historical Black voices and oral traditions Jones so powerfully evokes.”
—Booklist

“An exquisitely beautiful book-length poem, Song for Anninho, that was set after the destruction of the community that would be the subject of Palmares.”
—Farah Jasmine Griffin, The Nation

“Gayl Jones has concocted a tale as American as Mount Rushmore and as murky as the Florida swamps.”
—Maya Angelou

“Miss Jones . . . is an American writer with a powerful sense of vital inheritance, of history in the blood.”
—John Updike, The New Yorker

“A literary giant, and one of my absolute favorite writers.”
—Tayari Jones

“No novel about any Black woman could ever be the same after this.”
—Toni Morrison, on reading the manuscript for Corregidora

“Telling stories out loud was a matter of survival—and the way Jones wields this tradition transforms even a nursery rhyme into something dirty, dangerous, and important.”
—Calvin Baker, The Atlantic