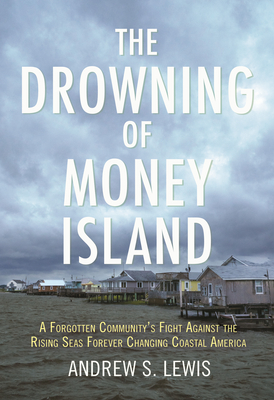 
Email or call for price
Offers a glimpse of the future of vanishing shorelines in America in the age of climate change, where the wealthy will be able to remain the longest while the poor will be forced to leave.

Journalist Andrew Lewis chronicles the struggle of his New Jersey hometown to rebuild their ravaged homes in the face of the same environmental stresses and governmental neglect that are endangering coastal areas throughout the United States. Lewis grew up on the Bayshore, a 40-mile stretch of Delaware Bay beaches, marshland, and fishing hamlets at the southern end of New Jersey, whose working-class community is fighting to retain their place in a country that has left them behind. The Bayshore, like so many rural places in the US, is under immense pressure from a combination of severe economic decline, industry loss, and regulation. But it is also contending with one of the fastest rates of sea level rise on the planet and the aftereffects of one of the most destructive hurricanes in American history, Superstorm Sandy. If in the years prior to Sandy the Bayshore had already been slowly disappearing, its beaches eroding and lowland cedar woods hollowing out into saltwater-bleached ghost forests, after the hurricane, the community was decimated. Today, homes and roads and memories are crumbling into the rising bay.

Cumberland, the poor, rural county where the Bayshore is located, had been left out of the bulk of the initial federal disaster relief package post-Sandy. Instead of money to rebuild, the Bayshore got the New Jersey Department of Environmental Protection’s Superstorm Sandy Blue Acres Program, which identified and purchased flood-prone neighborhoods where working-class citizens lived, then demolished them to be converted to open space.

The Drowning of Money Island is an intimate yet unbiased, lyrical yet investigative portrait of a rural community ravaged by sea level rise and economic hardship, as well as the increasingly divisive politics those factors have helped spawn. It invites us to confront how climate change is already intensifying preexisting inequality.
Andrew S. Lewis is a contributing writer for Outside and has also written for the New York Times Magazine and Guernica. He received an MFA in nonfiction writing from Columbia University. In 2018 he was awarded a CATWALK Art Residency. He lives in South Jersey, between the ocean and the bay. Connect with him at andrewslewis.com and on Twitter at @andrewslewis1.
“New Jersey coast native Lewis provides valuable perspective, utilizing his own experiences growing up in the area to relate to how the current residents feel. While by no means a one-sided polemic on doomsday scenarios, this excellent read does serve as a clarion call for those who question climate change.”
—Booklist

“This book humanizes the experience in ways that others have not.”
—Library Journal

“A must-read for anyone interested in how climate change is already deepening preexisting inequality. Meticulously and empathetically reported, The Drowning of Money Island invites readers to confront the difficult decisions that come with storm recovery in our era of higher tides and supercharged hurricanes. Stay or go, rebuild or retreat? The way we answer these questions will define who we become.”
—Elizabeth Rush, author of Rising: Dispatches from the New American Shore

“Elizabeth Kolbert’s The Sixth Extinction revealed the unnatural history of life’s struggle across Earth’s ice ages and water worlds. Andrew Lewis’s The Drowning of Money Island tells that story as it is happening, now, to the Delaware Bay neighbors of his rural hometown, where entire communities have been forced to abandon their homes and their American dreams. Lewis limns the region’s history to explain how rising waters threaten the watermen’s homes, their jobs, their children’s future, and their way of life.”
—Craig Nelson, best-selling author of Rocket Men and The Age of Radiance

“A deeply insightful narrative of both cultural and ecological migrations, The Drowning of Money Island shows us that while government agencies use cost-benefit equations to decide which neighborhoods should stay or go, the true cost of displacing people, disrupting cultural identity, is largely unrealized and undervalued. If this book were in the hands of our leadership today, they would understand the true cost of climate change and the moral obligation to move quickly to prevent harm to future generations.”
—Marcus Eriksen, author of Junk Raft and cofounder of the 5 Gyres Institute

“The Drowning of Money Island is a heartbreaking chronicle of the evolution of one coastal community in the age of climate disruption. Lewis writes lucidly of the tension between retreat and resilience and portrays a seaside landscape—its marshes, waterways, and fishes, and the kind of people drawn to them—with bracing honesty. This is a remarkable book.”
—Amy Seidl, author of Finding Higher Ground: Adaptation in the Age of Warming

“Climate change is wrecking peoples’ lives today. Even Americans’. Lewis’s lyrical homage to a community all too literally on the edge, warns of a million tragedies to come. The guardians of our coasts talk of ‘managed retreat’ in the face of rising tides. For the people of Bayshore, Superstorm Sandy proved to be the tipping point to managed demolition of their community.”
—Fred Pearce, author of Fallout: Disasters, Lies, and the Legacy of the Nuclear Age

“Both insider and journalist, reporter and member of the vanishing world he describes, Andrew Lewis delivers a resonant story of rising seas, grit, and loss on a working-class stretch of New Jersey coast known as the Bayshore. Lewis is a keen-eyed observer of mores, gesture, landscape, and sky, but The Drowning of Money Island sings most beautifully because he grew up on this shore. Climate change has struck, and he enables us to experience this singular community’s fight for survival as if it were our own. One of the many reasons to read this book is that before long, it might be.”
—Michael Greenberg, author of Beg, Borrow, Steal: A Writer’s Life