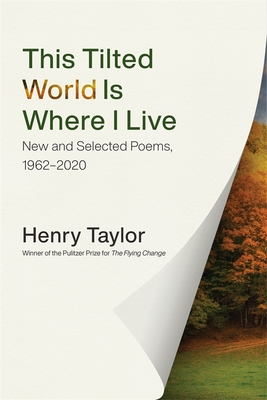 This Tilted World Is Where I Live presents one hundred poems by Henry Taylor, drawing on over fifty years of published work by this witty, adept, and vital literary voice. The volume gathers seventy-five poems from previous books, including the Pulitzer Prize-winning The Flying Change, along with twenty-five more recent poems collected for the first time.

Throughout his remarkable career, Taylor has worked in both traditional and open forms, avoiding rigid allegiance to either mode as he has responded to the world around him, from the horse farm in Virginia where he grew up, to the deserts around Santa Fe, New Mexico, where he now lives. In tones and moods ranging from grief to explosive hilarity, Taylor's verse considers what we mean by loving one another, how violence can intrude without warning into innocent lives, and how the things we have always seen can change with the passage of time. This Tilted World Is Where I Live encapsulates the keen attention, vital humanism, and mastery of craft that have characterized a long and distinguished poetic career.
Henry Taylor has published eight collections of poems, among them The Flying Change, for which he received the Pulitzer Prize. His other honors include the Michael Braude Award for Light Verse, the Witter Bynner Poetry Prize, the Aiken Taylor Award for Modern American Poetry, and membership in the Fellowship of Southern Writers. He and his wife, fiber artist Mooshe Taylor, live in Santa Fe, New Mexico