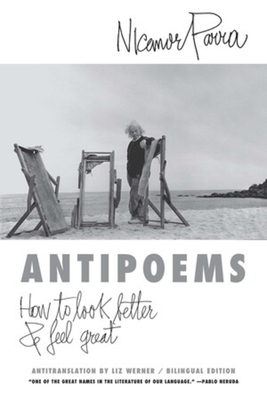 
Ships to Our Store in 1-5 Days
Antipoems: New and Selected, a fresh bilingual gathering as well as retrospective of the work of Chile’s foremost poet, reintroduces him to North American readers after thirteen years. Though he has been hardly unproductive, the politics of his homeland have channeled his inventiveness into new modes of expression, which remind us of the sometimes sly hermeticism of Italian writers, Eugenio Montale and Elio Vittorini among them, during the Fascist regime. As Frank MacShane makes clear in his introduction, Parra has not tried to escape repression, but by “using his wit and his humor, he has shown how the artist can still speak the truth in troubled times.” Since much of Parra’s early work is now out of print, editor David Unger has included many of the poems which influenced North American poets such as Ferlinghetti and Merton in the ‘50s and ‘60s, some in new or revised translations. Of Parra’s more recent work, there are generous selections from Artifacts (1972), Sermons and Preachings of the Christ of Elqui (1977), New Sermons and Preachings of the Christ of Elqui(1979), Jokes to Mislead the Police (1983), Ecopoems (1983), Recent Sermons(1983), and a section of “Uncollected Poems” (1984). Antipoems: New and Selected is edited by David Unger, who contributed many of the translations to Enrique Lihn’s The Dark Room and Other Poems (New Directions, 1978). Professor Frank MacShane of Columbia University, in his critical introduction, gives a full evaluation of a poet who is “unquestionably one of the most influential and accomplished in Latin America today, heir to the position long held by his countryman, Pablo Neruda.”

Born in 1914 in the southern city of Chillán, Nicanor Parra studied at the University of Chile, Brown, and Oxford, and spent many years as a teacher of mathematics and a professor of physics.
Nicanor Parra over everyone else.
— Roberto Bolaño