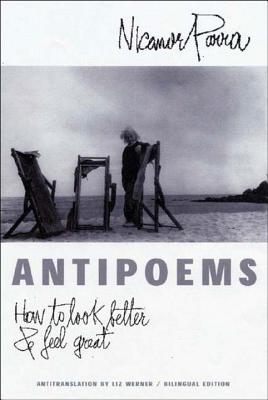 The first major collection in almost twenty years of new work by one of Latin America's greatest poets.

"Real seriousness," Nicanor Parra, the antipoet of Chile, has said, rests in "the comic." And read in that light, this newest collection of his work is very serious indeed. It is an abundant offering of his signature mocking humor, subverting received conventions and pretensions in both poetry and everyday life, public and private, ingeniously and wittily rendered into English in an antitranslation (the word is Parra's) by Liz Werner. Of the fifty-eight pieces in Antipoems, the first twenty-three are taken from Parra's 1985 collection, Hojas de Parra ("Vine Leaves" or "Leaves of Parra"), two others appeared in his Paginas en Blanco ("Blank Pages," 2001), while the rest come straight out of his notebooks and have never been published before, either in Spanish or English. The book itself is divided into two sections, "Antipoems" (im)proper and a selection of Parra's most recent incarnation of the antipoem, the hand-drawn images of his "Visual Artefactos."

As his anti-translator Liz Werner explains in her Introduction, Parra's scientific training infuses his work. "Viewed through the lens of antimatter," she writes, "antipoetry mirrors poetry, not as its adversary but as its perfect complement."

Born in 1914 in the southern city of Chillán, Nicanor Parra studied at the University of Chile, Brown, and Oxford, and spent many years as a teacher of mathematics and a professor of physics.

Liz Fania Werner has lived and studied in Valparaíso, Chile. She recently completed an antiwar public poetry installation, "Blackout Poems," and is currently working on her first novel and conducting poetry-writing workshops in a juvenile detention center in her native New York City.
A poet with all the authority of a master.
— Mark Strand - The New York Times Book Review

One of the great names in the literature of our language.
— Pablo Neruda

Includes a great introduction to Parra and his work by the translator that effortlessly mixes personal anecdote and historical context.
— Jesse Tangen-Mills - Bookslut