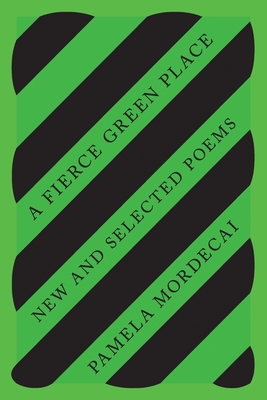 A fearless collection by a trailblazing writer whose poems “represent the people, culture, and topography of the Caribbean in multidimensional, complex ways” (Tanya Shirley)

A Fierce Green Place: New and Selected Poems brings together, across the span of thirty-plus years, the rebellious, innovative work of the Jamaican-born Canadian writer Pamela Mordecai. From her acclaimed first collection Journey Poem published in 1989, to the moving elegy for her murdered brother in the true blue of islands, to the stories of freed slaves told in subversive sonnets, and on to her dazzling reimaginings of biblical stories, A Fierce Green Place highlights the astounding range and depths of a poet who mixes Jamaican Creole with standard English, profanity and reverence with dub and blues, the oral and vernacular with metrical virtuosity. Mordecai’s words, written out of a “womb-space” of sound and power, shine through neo-colonial violence and patriarchy with such lines as: “Women together / in one place will / bleed in solidarity / till every last body / turn super bitch at once."

Pamela Mordecai has published eight collections of poetry, five children’s books, and a collection of short fiction, Pink Icing first published by Insomniac Press and recently released as an audiobook read by herself in ECW Press’s Bespeak Audio Editions. Her debut novel, Red Jacket, was shortlisted for the Rogers Writers’ Trust Fiction Award, one of Canada’s top prizes for literary fiction. Mordecai is well known internationally for her children’s poems, which have been widely anthologized as well as used in language-arts curricula in the Caribbean, India, Malaysia, UK, USA, and West Africa. A veteran anthologist with several collections to her credit, she has a special interest in the writing of Caribbean women. She has published numerous language-arts textbooks for the Caribbean, most of them with the late Grace Walker-Gordon. A play for children, El Numero Uno or the Pig from Lopinot, had its world premiere at the Young People’s Theatre in Toronto in 2010 and its Caribbean premiere at the Edna Manley School for the Performing Arts in Kingston in 2016. With her late husband, Martin, Mordecai wrote Culture and Customs of Jamaica in a series edited by Peter Standish, originally for Greenwood Press. A trained language arts teacher with a PhD in English, she was for many years publications officer in the Faculty of Education, UWI and publications editor of the Caribbean Journal of Education. She has also worked in media, especially television. In 2015, Mordecai was filmed reading her first five poetry collections, as well as some poems and stories for children. The videorecordings can be accessed at https://mordecai.citl.mun.ca. She lives in Toronto and has three children and a granddaughter.

Carol Bailey is an Associate Professor in the English Department at Westfield State University in Massachusetts, where she teaches courses in World, Postcolonial, Caribbean and Cross-Cultural, and Women’s Literatures. She is the author of A Poetics of Performance: The Oral-Scribal Aesthetic in Anglophone Caribbean Fiction (UWI Press, 2014).

Stephanie McKenzie is the author of three books of poetry (all published by Salmon Poetry) and a literary monograph, Before the Country: Native Renaissance, Canadian Mythology (published by the University of Toronto Press). She teaches in the English Programme at Grenfell Campus, Memorial University of Newfoundland.

Tanya Shirley has published two poetry collections with Peepal Tree Press in the UK: She Who Sleeps With Bones and The Merchant of Feathers. Her work has been featured on BBC World Service and The Poetry Archive, and has been translated into Spanish and Polish. She has conducted writing workshops and performed in the UK, Canada, the Caribbean, Venezuela, and the USA. She lectures at The University of the West Indies, Mona Campus and is a proud Cave Canem fellow.
One of the most brilliant and witty of our poets.
— Kamau Brathwaite

What to say of Pamela’s poetry? Juicy. The salt juice of living blood. The sweet, liquid whispers of desire dripping from full lips. The acid venom of righteousness spat in the eye of the wicked.
— Nalo Hopkinson

Mordecai illuminates the challenges of life at the crossroads of race, class and gender. Her subjects are diverse, her storytelling immediate—especially in her use of a vibrant, dynamic language that superbly articulates an irrepressible Jamaican spirit.
— The Star