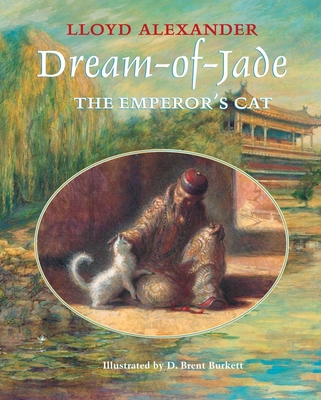 
Currently Unavailable
No ordinary man is permitted to see the great Kwan-Yu, emperor of China, but this doesn't stop the beautiful, green-eyed Dream-of-Jade, since she is not an ordinary man, but a rather unusual cat. When Dream-of-Jade decides she wants to see His Highness, she simply slips into the empty throne room and sits upon the imperial throne. When Kwan-Yu arrives, she does not give up her seat, but does point out the dangerous state of the emperor's ceiling. Thus begins the great friendship between an Emperor and a little white cat, who not only saves the emperor's life at their first meeting, but knows how to cure his ailments, make him laugh, and entertain him, and whose greatest wish is to make Kwan-Yu the best emperor ever to rule China. Lloyd Alexander has written this little masterpiece filled with details from ancient Chinese court life. With his sharp wit, tongue-in-cheek humor, and good-natured satire, he exposes the rigidity of ancient imperial customs and traditions. Dream-of-Jade's no-nonsense solutions to seemingly insurmountable problems delight children and adults alike, making this tale an unforgettable reading adventure for the entire family.