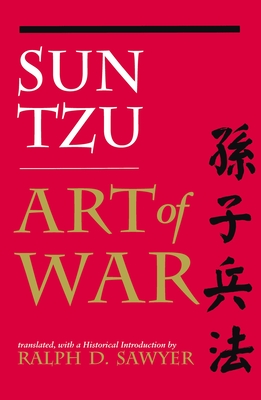 
Ships to Our Store in 1-5 Days
The definitive translation of Sun-tzu's timeless classic of military strategy, Art of War

Sun-tzu's Art of War is almost certainly the most famous study of strategy ever written. This treatise has been credited with influencing some of the most legendary military operations. Beyond the battlefield, people far and wide have long turned to Art of War for advice on how to succeed in various competitive situations, and companies around the world now make this book required reading for their executives.

In this translation, Chinese warfare scholar Ralph D. Sawyer places Art of War in its proper historical context, outlining several battles that Sun-tzu either conducted or that may have influenced him, and offers an edition that is uniquely accurate and accessible.

Ralph D. Sawyer, a leading scholar of Chinese warfare, has worked extensively with major intelligence and defense agencies. After studying at MIT and Harvard, Sawyer has spent over thirty years lecturing and doing international consulting work focused on China.
"A tour de force. Sawyer puts this most famous of the classic Chinese military writings into context and shows that Sun-tzu was not just a solitary genius, but the product of a remarkably rich martial culture."
—Robert L. O'Connell, author of Fierce Patriot

"I am convinced that this translation...will prove to be the definitive edition for many years to come."
—Robin D.S. Yates, McGill University

"Fills a serious gap for anyone interested in the history of ancient warfare...a fascinating book."—Arther Ferrill, author of The Origins of War