The Limits of Humanitarian Intervention: Genocide in Rwanda (Paperback) 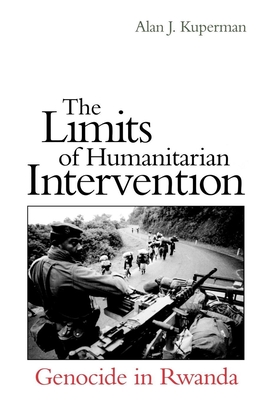 In 1994 genocide in Rwanda claimed the lives of at least 500,000 Tutsi --some three-quarters of their population --while UN peacekeepers were withdrawn and the rest of the world stood aside. Ever since, it has been argued that a small military intervention could have prevented most of the killing. In The Limits of Humanitarian Intervention, Alan J. Kuperman exposes such conventional wisdom as myth.

Combining unprecedented analyses of the genocide's progression and the logistical limitations of humanitarian military intervention, Kuperman reaches a startling conclusion: even if Western leaders had ordered an intervention as soon as they became aware of a nationwide genocide in Rwanda, the intervention forces would have arrived too late to save more than a quarter of the 500,000 Tutsi ultimately killed. Serving as a cautionary message about the limits of humanitarian intervention, the book's concluding chapters address lessons for the future.

Alan J. Kuperman is assistant professor of international relations at John Hopkins University's School of Advanced International Studies and the author of numerous articles on ethnic conflict and humanitarian intervention.