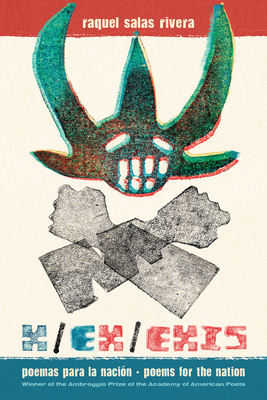 
Currently Unavailable
Written in the early days of the rise of world-wide fascism and the poet’s gender transition, x/ex/exis: poemas para la nación/poems for the nation accepts the invitation to push poetic and gender imaginaries beyond the bounds set by nation.

From teen dysphoria, to the incarceration of anticolonial activists Oscar López and Nina Droz Franco, to the entanglement of church and state, these poems acknowledge the violence of imposed binaries. For Salas Rivera, the x marks Puerto Rican transness in a world that seeks trans death, denial, and erasure. Instead of justifying his existence, he takes up the flag of illegibility and writes an apocalyptic book that screams into an uncertain future, armed with nothing to lose.

In today's post-disaster Puerto Rico and a world shaped by the recurring waves of an ecological apocalypse, Salas Rivera’s words feel visionary, mapping a decolonizing territory, a body, and identity of both soil and heart.

Raquel Salas Rivera is a Puerto Rican poet, translator, and editor. His honors include being named the 2018–19 poet laureate of Philadelphia and receiving the New Voices Award from Puerto Rico’s Festival de la Palabra. He is the author of five full-length poetry books. He’s received a Lambda Literary Award for Transgender Poetry and was longlisted for the 2018 National Book Award as well as the 2020 Pen America Open Book Award. antes que isla es volcán / before island is volcano, his sixth book, is an imaginative leap into Puerto Rico’s decolonial future and is forthcoming from Beacon Press in 2022. He writes and teaches in Puerto Rico.

"Winning me over entirely with their fiercely rendered tenderness and emergent sense of a simultaneously tough and tender I, these poems and their speaker are, to use so simple a word for so complex a world, strong. Strong. These poems do not play by formality or easy rules—and are all the more compelling because of that, stretching the idea of rules altogether, rules in all things, from written punctuation to living a life. These poems speak passion and clarity and yearning. More important, they simply speak. In an often wild gallop through language and ideas, unfamiliar leaps across singular experiences, I am thrown off the horse many times, but the speaker keeps talking me repeatedly back into the saddle of these poems." —Alberto Álvaro Ríos, from the 2018 Ambroggio Prize citation

“Raquel Salas Rivera writes the poetry of the self split in half, and the x factor is where we might discover our levels of resistance to the body’s objectification, sacrifice, and misidentification. Guided by an almost surreal imagery, x/ex/exis teaches us how to write from the silence of captivity with a nuanced bilingualism. The lines in these poems work off Salas Rivera’s beautifully decolonized logic and turn until they ultimately construct a nation of truth or cut you until you bleed into a new body.”—Willie Perdomo, author of The Crazy Bunch

“Again, Raquel Salas Rivera proves that they are not a poet limited by any one style or voice, but rather a poet who follows the idea and the lyric all the way thru. x/ex/exis sings beautiful and strange in both the Spanish and the English, but the speaker at the center refuses a clean translation, ribboning the poems with an energy that makes these landscapes of self, community, and nation rise off the page to live in the air and your body.”—Danez Smith, author of Don’t call Us Dead and Homie

“x/ex/exis is an exposition of temporal markings, revolutions both lyric and historic. We are shaped alongside language and time’s beats, belong, and are made to belong to them. It is hard to believe one can break away from such coercive rhythms, ‘who cares’ being ‘facism’s motto,’ and it is much easier to continue to imagine that time’s trajectory is fixed. Against this, these poems care—they care deeply—they prod the reader to care. Raquel Salas Rivera’s collection, contingent and mid-march, speaks not on behalf of such perfection, of a coming world or word, but of a break already within this one: a reality, now, possible, and ‘richer than language.’”—Jos Charles, author of feeld