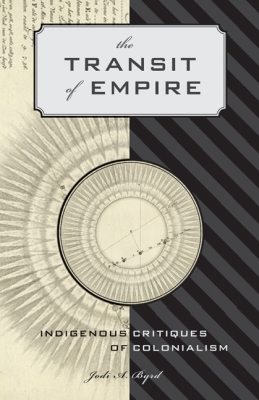 By Jodi A. Byrd
Email or call for price

In 1761 and again in 1768, European scientists raced around the world to observe the transit of Venus, a rare astronomical event in which the planet Venus passes in front of the sun. In The Transit of Empire, Jodi A. Byrd explores how indigeneity functions as transit, a trajectory of movement that serves as precedent within U.S. imperial history. Byrd argues that contemporary U.S. empire expands itself through a transferable “Indianness” that facilitates acquisitions of lands, territories, and resources.

Examining an array of literary texts, historical moments, and pending legislations—from the Cherokee Nation of Oklahoma’s vote in 2007 to expel Cherokee Freedmen to the Native Hawaiian Government Reorganization bill—Byrd demonstrates that inclusion into the multicultural cosmopole does not end colonialism as it is purported to do. Rather, that inclusion is the very site of the colonization that feeds U.S. empire.

Jodi A. Byrd is a citizen of the Chickasaw Nation of Oklahoma and assistant professor of American Indian studies and English at the University of Illinois at Urbana–Champaign.

"Theoretically rich, and broad in its intellectual scope, The Transit of Empire puts Indianness at the center of American histories that are not only national, but explicitly imperial and colonial. Jodi Byrd’s brilliant critique of contemporary multicultural liberalism places American Indian and Indigenous studies in close dialogue with postcolonial scholarship, transforming both in the process.  It is a work of power, complexity, and commitment, and should not be missed by anyone in these fields." —Philip Deloria

"The Transit of Empire is a sophisticated and groundbreaking work of indigenous critical theory in which Jodi Byrd reveals and explores the cacophonies of colonialism in literary, historical, and political settings." —Kevin Bruyneel, Babson College