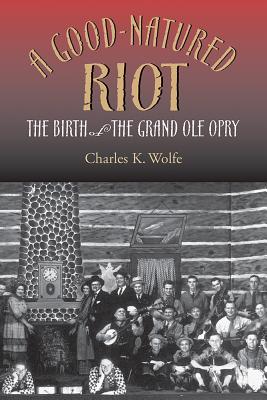 
Currently Unavailable
Winner of the Ralph J. Gleason Music Book Award
Winner of the ASCAP Deems Taylor Award On November 28, 1925, a white-bearded man sat before one of Nashville radio station WSM's newfangled carbon microphones to play a few old-time fiddle tunes. Uncle Jimmy Thompson played on the air for an hour that night, and throughout the region listeners at their old crystal sets suddenly perked up. Back in Nashville the response at the offices of National Life Insurance Company, which owned radio station WSM ("We Shield Millions"), was dramatic; phone calls and telegrams poured into the station, many of them making special requests. It was not long before station manager George D. Hay was besieged by pickers and fiddlers of every variety, as well as hoedown bands, singers, and comedians--all wanting their shot at the Saturday night airwaves. "We soon had a good-natured riot on our hands," Hay later recalled. And, thus, the Opry was born. Or so the story goes. In truth, the birth of the Opry was a far more complicated event than even Hay, "the solemn old Judge," remembered. The veteran performers of that era are all gone now, but since the 1970s pioneering country music historian Charles K. Wolfe has spent countless hours recording the oral history of the principals and their families and mining archival materials from the Country Music Foundation and elsewhere to understand just what those early days were like. The story that he has reconstructed is fascinating. Both a detailed history and a group biography of the Opry's early years, A Good-Natured Riot provides the first comprehensive and thoroughly researched account of the personalities, the music, and the social and cultural conditions that were such fertile ground for the growth of a radio show that was to become an essential part of American culture. Wolfe traces the unsure beginnings of the Opry through its many incarnations, through cast tours of the South, the Great Depression, commercial sponsorship by companies like Prince Albert Tobacco, and the first national radio linkups. He gives colorful and engaging portraits of the motley assembly of the first Opry casts--amateurs from the hills and valleys surrounding Nashville, like harmonica player Dr. Humphrey Bate ("Dean of the Opry") and fiddler Sid Harkreader, virtuoso string bands like the Dixieliners, colorful hoedown bands like the Gully Jumpers and the Fruit Jar Drinkers, the important African American performer DeFord Bailey, vaudeville acts and comedians like Lasses and Honey, through more professional groups such as the Vagabonds, the Delmore Brothers, Bill Monroe and the Blue Grass Boys, and perennial favorite Roy Acuff and his Smoky Mountain Boys. With dozens of wonderful photographs and a complete roster of every performer and performance of these early Opry years, A Good-Natured Riot gives a full and authoritative portrayal of the colorful beginnings of WSM's barn dance program up to 1940, by which time the Grand Ole Opry had found its national audience and was poised to become the legendary institution that it remains to this day.
Charles K. Wolfe (1943-2006) was one of the leading experts on the history and development of country music. He wrote or edited around twenty books, including The Devil's Box: Masters of Southern Fiddling (Vanderbilt University Press/Country Music Foundation Press). Until his retirement in 2005, he was an English professor at Middle Tennessee State University. His work helped popular music scholarship gain academic acceptance.