The Boudoir Bible: The Uninhibited Sex Guide for Today (Hardcover) 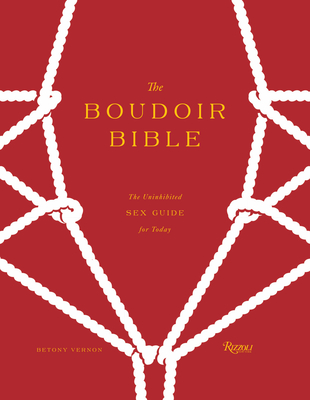 The Boudoir Bible: The Uninhibited Sex Guide for Today (Hardcover)


Currently Unavailable
A comprehensive and instructional guide to the new sexual landscape, covering "new territories" such as bondage, role playing, and sex toys that would make your parents blush. Since the publication of The Joy of Sex in 1972, the sexual landscape’s boundaries have been expanded to include a host of practices that are unthinkable in that classic tome. Although it also covers the basics, The Boudoir Bible fills those niches missing from other sex guides nicely, with full, elaborated chapters on rope bondage, restraints of sound and sight, erotic flagellation, and the stimulation of new erogenous zones, among innumerable other offerings. Well-researched, The Boudoir Bible is written from a joyful, sex-positive point of view. Going beyond the "lovemaking" of older guides, this witty and uninhibited tome expands the sexual act to encompass "verboten" topics, with chapters entitled "The Genital Gym," "Nipple Tease," "Male Ejaculation Control," and "The Anthems of Anal Sex." Illustrated by the renowned artist François Berthoud, whose provocative creations have graced both Prada campaigns and museum exhibitions, The Boudoir Bible provides a fresh view of sexuality in the twenty-first century.
Betony Vernon is a sex educator based in Paris and Milan. Her role as advisor for fashion editors and magazines makes her a go-to sex expert, from the boardroom and television studio to the bedroom. Vernon is a continuous presence in high fashion magazines such as French Vogue, GQ, Playboy, and the New York Times. She has starred in a TV series on sexual education on both French and Italian television. François Berthoud is recognized as one of the most original illustrators working today. His work is prominently featured in the exhibition and catalogue Drawing Fashion.
“..a witty and frank sex guide aimed at loosening attitudes about certain sex practices...” ~The New York Times

“..author Betony Vernon dismantles sexual taboos and empowers readers to be the best they can be in bed..” ~Sharp

"This beautifully laid out book covers basics, such as anatomy, hygiene, as well as more risqué topics…” ~Film Noir Blonde

“It’s always a joy to find a book that offers smart information on the building blocks of sexual pleasure; The Boudoir Bible is a most welcome addition to the sexual lexicon.” ~Archetypeme

"..a modern guide to expanding the horizons of pleasure." ~Time.com

"Betony Vernon is a bona fide sexual anthropologist…the surprisingly upbeat and joyful tome teaches and encourages readers to experiment with un-traditional bedroom antics in order to enhance what she calls 'the sexual ceremony'." ~Style.com