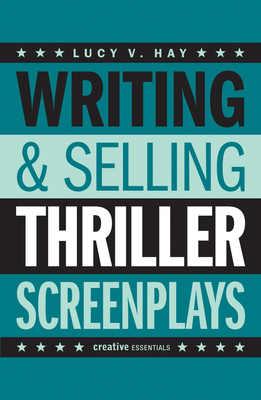 
Coming Soon - Available for Preorder Now
Writing and Selling Thriller Screenplayshas the lowdown on how to get your thriller feature script on to the page, and how to get it in front of producers and investors.
First published in 2013, this new edition offers an all-new resources section and a host of new case studies that map the considerable changes of the past decade. With marketplace disruptors such as Netflix and the first phases of The Marvel Cinematic Universe leaving their mark, new opportunities have been created for screenwriters and filmmakers who are keen to get their stories in front of industry professionals.
This time around, Lucy V Hay doesn't just guide you through the writing of movies, but spec TV pilots too. Putting iconic, mixed-genre projects under the microscope -such asStranger Things(horror thriller),Brooklyn 99(comedy thriller) andLost(sci fi thriller) - she considers what writers can learn from these shows.
She also argues that the lone protagonist in a thriller has had its day and looks at how the genre is moving into a space beyond 'The Hero's Journey'. Case studies to support this includeThe Hunger Games,Captain Marvel,Iron Manand many more.
Finally, the book considers how the screenplay might be sold to investors, exploring high concept ideas, pitching, packaging and the realities of film finance - all updated for the 2020s - and lays out alternative routes to sales and production, including transmedia such as novels and adaptation, and immersive storytelling online.
Lucy V. Hay is a novelist, script editor and script reader. She is one of the founding organizers of the London Screenwriters’ Festival and Associate Producer of the dark Brit thriller Deviation (2012), starring King of the Indies Danny Dyer and Hellboy 2’s Anna Walton. Lucy has read for a variety of production companies, funding initiatives and screen agencies as well as individual directors and producers with her Bang2write script consultancy. She owns the scriptwriting craft tips and networking site at www.bang2write.com and the online writers’ group on Facebook and Twitter, Bang2writers.