The Natural Law: A Study in Legal and Social History and Philosophy (Paperback) 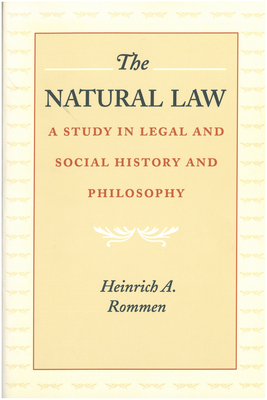 The Natural Law: A Study in Legal and Social History and Philosophy (Paperback)

By Heinrich A. Rommen

Originally published in German in 1936, The Natural Law is the first work to clarify the differences between traditional natural law as represented in the writings of Cicero, Aquinas, and Hooker and the revolutionary doctrines of natural rights espoused by Hobbes, Locke, and Rousseau.

Heinrich A. Rommen (1897-1967) taught in Germany and England before concluding his distinguished scholarly career at Georgetown University.

Russell Hittinger is William K. Warren Professor of Catholic Studies and Research Professor of Law at the University of Tulsa.