Incidents of Travel in Poetry: New and Selected Poems (Paperback) 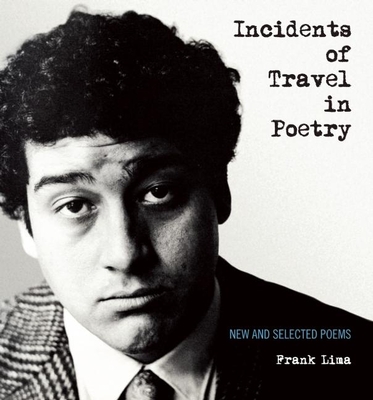 Incidents of Travel in Poetry: New and Selected Poems (Paperback)

This collection is not to be missed.--Publishers Weekly, starred review

Prot g of Frank O'Hara, Kenneth Koch, and Allen Ginsberg, Frank Lima (1939-2013) was the only Latino member of the New York School during its historical heyday. After enduring a difficult and violent childhood, he discovered poetry as an inmate of a juvenile drug treatment center under the tutelage of the painter, Sherman Drexler, who introduced him to his poet friends. After his poetry debut in the Evergreen Review in 1962, Lima appeared in key New York School anthologies and published two full-length collections of his own. In the late 1970s, Lima left the poetry world to pursue a successful career as a chef, though he returned intermittently and continued to write a poem a day until his death.

Incidents of Travel in Poetry is a landmark re-introduction to the work of this major Latino poet. Beginning with poems from Inventory (1964), his installment in the legendary Tibor de Nagy poetry series, Incidents includes selections from Lima's previous volumes, tracing his development from his early snapshots of street life to his later surrealist-influenced abstract lyricism. The bulk of the collection comes from his later unpublished manuscripts, and thus Incidents represents the full range of Lima's work for the very first time.

Praise for Incidents of Travel in Poetry:

Finally. Finally. Finally. Here's the Frank Lima collection that poetry lovers worldwide have been waiting for. Lima was an authentic outlier and Incidents of Travel transcends and decolonizes any attempt at easy categorization. With this new body of work, we are reaping the price Lima paid for being ostracized. Our reward? The dream we wish we could have, whispers that hint of a new waste land, and we'll always be in his debt for having Lima as a guide.--Willie Perdomo, The Essential Hits of Shorty Bon Bon.

Frank Lima is a masterful writer of ecstatic, devastating, and hauntingly personal poetry. His candor is irresistible and transformative, as cuttingly witty in one poem as elegiac and sorrowful in the next. Complete with its nuances and disappointments, nobody writes the poetry of domestic reverence quite like Lima. In this generous selection of work from the poet's life, including poetry from 1997 onward, we can finally solidify Lima as a figure of crucial importance to our understanding of the New York School writers. This work shines with all the love and labor of Lima's thoroughly American experience, one which is inextricable from the trauma of cultural duality. Lima's voice speaks to us like an intimate friend, a co-conspirator in hope. 'Blessed are the poets who invented us as poets, ' he writes in a poem for David Shapiro, an ode to both his best friend and to poetry. Blessed are we now to have this landmark collection of work from Frank Lima. This book is a long overdue treasure.--Wendy Xu

From his first contact with poetry while incarcerated as a juvenile offender in Harlem, through his meetings with Langston Hughes and Frank O'Hara, his years with Berkson and Padgett and Berrigan, his stint as a chef, and his years of living his Vow to Poetry when he wrote at least a poem a day in total obscurity--Lima's life is an epic of contradictions. Frank Lima is a poet the world has been waiting to discover. Now we can.--Bob Holman