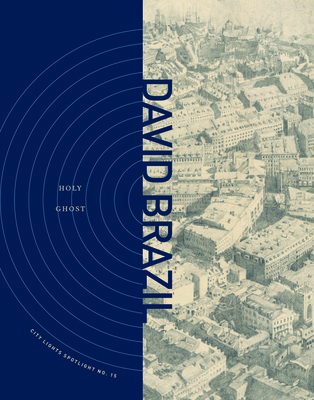 The third full-length collection from poet-scholar-activist David Brazil, Holy Ghost is a hymnal with secular burdens, poured from the mold of our actual life in common, sung against its limits. It seeks a way to find and build a soul together, and records the seekers' findings along the way, proposing love as our common human denominator. A record of the author's struggle to forge a relationship between two distinct vocations--one historical, as an activist (with Occupy Oakland, among other projects), and one spiritual, as he explores the path of radical Christian discipleship (in his life as a pastor)--Holy Ghost attempts to articulate an understanding of where class struggle meets the will of God.

Part of Brazil's worldview seems to be the perception that we are living in philosophically meager times, a new Dust Bowl of spiritual and moral poverty. He means to galvanize dissent, to encourage 'righteous action rhetoric can't break.' Through a clever patois, Brazil mixes elevated and colloquial language, benediction and idiom, to create captivating juxtapositions: 'in the splendid garden of the lambent forms, I'm / about to ask y'all a question.'--Publishers Weekly

Brazil's poems are incantations, rhythmic, jagged, calling. He creates an atonal, jazzy, and welcoming spirit ... Though there is an echo of John Cage-like change music, Brazil's poetry is drawn from the language, sounds, and beat of everyday life, made new and alluring.--Booklist

One of the special books of this decade and should be read by Souls or Ghosts or Geists in search of assurance ... Brazil's Holy Ghost is as Romantic as a long poem by Percy Shelley. An act of beauty--breath-taking.--Michael McClure

All singing is contemporaneous in the heart, & thus I'd call Holy Ghost heart-felt. It keeps time with the forms of its devotion ... So it arrives rich, by which I mean empty handed, & so doing makes the book into a little ball of light, a trove of mercy's tone, & my heart's treasure.--Dana Ward

'When time is the instrument, grace is the measure, ' writes David Brazil, in this dazzling book of 'earthly liturgy.' These poems of glorification, joyful and solemn, speak to the erasure of the boundary between mrtam/amrtam (death/non-death) and recall Blake's Songs of Innocence and Experience as well as Robert Duncan's Heavenly City Earthly City. With clarity and infinite finesse, the rhythms and tensile swing of Brazil's writing direct hymn's availability, from today's idiomatic speech to a yesteryear of sermon and rune. Every note counts.--Norma Cole

David Brazil is a poet, translator and novelist. His books include The Ordinary and antisocial patience. With Kevin Killian, he edited the Kenning Anthology of Poets Theater 1945-1985. From 2008 to 2011 he published over sixty issues of the seminal TRY! magazine with Sara Larsen. David co-pastors a house church in Oakland and works for social justice with the Faith Alliance for a Moral Economy. He's a Scorpio.