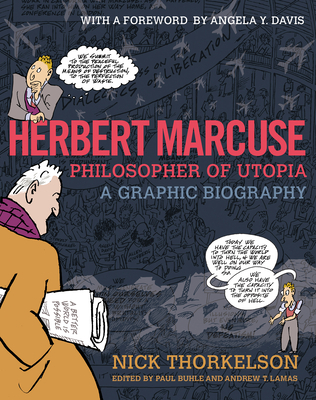 "I believe that Marcuse's ideas can be as valuable today as they were fifty years ago."--Angela Y. Davis, from the foreword

Herbert Marcuse was one of the twentieth century's most unlikely pop stars: a celebrity philosopher. In the 1960s, his argument for a "principled utopianism" catalyzed the idealism of a rebellious generation, and Marcuse became an intellectual guide for activists and revolutionaries around the world.

From his early studies with Martin Heidegger, to his flight from Nazi Germany with Frankfurt School colleagues, to his status as a countercultural icon, readers are introduced to the development of Marcuse's philosophical theories and the political realities that shaped his work.

Marcuse's advocacy for a more humane, sustainable world was grounded in a personal knowledge of authoritarianism's violence, and the risk of its resurgence. Perennially relevant, radical, and inspiring, Marcuse's concept of a Great Refusal--the protest against that which is--is a guide for our times.

Nick Thorkelson's exploration of the ideas and personality of Herbert Marcuse is exactly the sort of comic book I have longed to read. It is engaging, artful, and explores the world of revolutionary ideas. Books like this keep the fire going inside.--Joe Sacco, author of Footnotes in Gaza

A warm, funny, richly detailed biography. Thorkelson has found a powerful graphic style and narrative voice that animate Marcuse's life and his theory of rebellion. As both personal saga and primer on radical political philosophy, it could not be more relevant to today's resistance movement.--Dan Wasserman, editorial cartoonist for The Boston Globe

Marcuse's energizing sense of critique, hope, politics, and utopian vision are more necessary than ever, especially for the emerging generations of young activists.--Henry A. Giroux, author of American Nightmare: Facing the Challenge of Fascism

A riotous romp through 20th-century philosophy. The story of a man who exists at the eye of storm of ideas, of movements and of social strategies. With workers and students on the streets of Paris once more, Marcuse's life and work has never been more relevant.--Kate Evans, author of Red Rosa: A Graphic Biography

Philosopher of Utopia is art on the attack A perfect celebration of this unique public intellectual done through a fusion of skill and imagination, Thorkelson's book provides access to the genius and the grit of this master of the dialectic.--Lowell Bergman, Winner of the Pulitzer Prize and Distinguished Chair in Investigative Reporting at UC Berkeley

This book] confirms my belief that our medium can convey the most complex ideas while being witty and entertaining at the same time.--Sharon Rudahl, author of A Dangerous Woman: A Graphic Biography of Emma Goldman

Nick Thorkelson is a cartoonist living in Boston. He has done cartoons on local politics for The Boston Globe and in support of organizations working on economic justice, peace, and public health. He is the co-author and/or illustrator of The Earth Belongs to the People, The Underhanded History of the USA, The Legal Rights of Union Stewards, The Comic Strip of Neoliberalism, and Economic Meltdown Funnies, and has contributed to a number of nonfiction comics anthologies. He is working on a graphic novel about the end of the Sixties, A Better World Is Possible. Nick also moonlights as a musician, animator, graphic designer, and painter.Paul Buhle, a journal publisher in the New Left and publisher of one of the first Underground Comix, has written or edited many volumes including the biographies of C.L.R. James, William Appleman Willliams and Harvey Kurtzman, returned to comic art with a dozen volumes since 2005 including The Beats, among other subjects. His works, including comics, have been published in more than a dozen languages. He taught at Brown University until retirement.Andrew T. Lamas teaches urban studies and critical theory at the University of Pennsylvania, is co-editor of The Great Refusal: Herbert Marcuse and Contemporary Social Movements (Temple University Press, 2017), and serves on the boards of the International Herbert Marcuse Society, the Radical Philosophy Review, and the Bread and Roses Community Fund.Angela Y. Davis is the Distinguished Professor Emerita in the History of Consciousness and Feminist Studies Departments at the University of California--Santa Cruz. A former student of Herbert Marcuse, she is the author of many books and articles, including Angela Davis: An Autobiography (1974), Women, Race and Class (1981), Blues Legacies and Black Feminism: Gertrude Ma Rainey, Bessie Smith, and Billie Holiday (1998), Are Prisons Obsolete? (2003), Abolition Democracy: Beyond Empire, Prisons and Torture (2005), The Meaning of Freedom and other Difficult Dialogues (2012), and Freedom is a Constant Struggle: Ferguson, Palestine, and the Foundations of a Movement (2016). She is a founding member of Critical Resistance, which is dedicated to the dismantling of the prison industrial complex. She is the subject of the acclaimed documentary Free Angela and All Political Prisoners (2012).