The Canine Good Citizen: Every Dog Can Be One (Paperback) 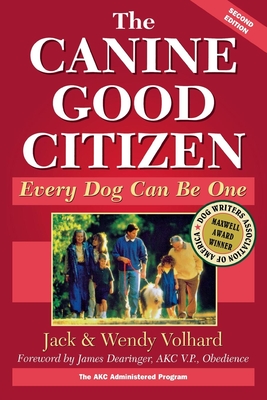 The Canine Good Citizen: Every Dog Can Be One (Paperback)


Ships to Our Store in 1-5 Days
"...purebred or mixed, with this book any dog can become a Canine Good Citizen..." The Volhards'...approach to training, which they call the Motivational Method, ...is designed to do just that motivate the owner and the dog. The Motivational Method is grounded on a thorough knowledge of how people learn and dog behavior. Since 1983 they have authored or co-authored four major books on dog training and teaching dog Obedience classes, and have produced four video tapes. "I am...pleased that they have written this book on the Canine Good Citizen. I cannot think of anyone else who could have done a better job. This book contains everything the reader needs to know about training any dog to become a Canine Good Citizen. Still, there is much more the book shares a wealth of insights for the beginner, as well as the experienced dog person. "The book's best feature is that it gives each person the means to tailor the training to the individual dog's character and temperament. It thoroughly explains what makes dogs different and how these differences dictate the approach to training that needs to be taken." --James E. Dearinger, AKC Vice President, Obedience
The American Kennel Club's Canine Good Citizen program was developed to promote responsible dog ownership in a manner that would be easy for both dog and owner. Any book that promotes and encourages dog owners to participate is doing a public service, and this book does it well.
"This book is aptly named. Yes, every dog, both pure-bred dogs and mixed breeds, can be a good citizen if their owners care enough to make it happen. The key is to encourage dog owners everywhere to be responsible enough to make their dogs a pleasure to be around and able to handle most situations that they might be expected to encounter in everyday life." --Robert H. McKowen AKC Vice President, Performance Events.
The VOLHARDS share their home in upstate New York with six dogs and three cats. For the past twenty-five years, they have taught over 20,000 people how to communicate effectively with their pets. They conduct weekend seminars in various parts of the United States, Canada and England, as well as five-day training Camps, which have been attended by individuals from almost every state, Argentina, Australia, Canada, England, Germany, Japan, Mexico, the Netherlands, New Zealand, Puerto Rico, the Republic of Singapore, Switzerland and the West Indies. Over the years they have served different dog organizations in a variety of capacities, and they are internationally known as "trainers of trainers." Jack has authored over 100 articles for various dog publications and is the recipient of six awards from the Dog Writers' Association of America (DWAA). He is the senior author of five books?two with Wendy?and four videotapes. He has been an AKC Obedience judge (Novice through Utility) since 1973, and he is a member of the Association of Dog Obedience Clubs and Judges. Wendy is the recipient of four awards from the DWAA and developed the most widely used system for evaluating and selecting puppies. Her film, Puppy Aptitude Testing, was named Best Film on Dogs for 1980 by the DWAA. She also devised a Personality Profile for dogs to help owners gain a better understanding of their pets. Her article "Drives?A New Look at an Old Concept" was named Best Article in a Specialty Magazine for 1991 by the DWAA. She is the co-author?together with Kerry Brown, DVM?of The Holistic Guide to a Healthy Dog (Howell Book House, 1995). Wendy specializes in behavior, nutrition and alternative sources of health care, such as acupuncture and homeopathy, and she formulated a balanced, homemade diet for dogs. She is a member of the Animal Behavior Society, the Advisory Board of the North American Wildlife Foundation and the United Kingdom Registry of Behaviour Consultants, and she has lectured at the prestigious Natural History Museum in London. The Volhards have obtained over fifty Obedience titles, multiple High in Trial awards and Dog World Awards of Canine Distinction with their Landseer Newfoundlands, Yorkshire Terrier, Standard Wirehaired Dachshund, Labrador Retriever and German Shepherd Dog.