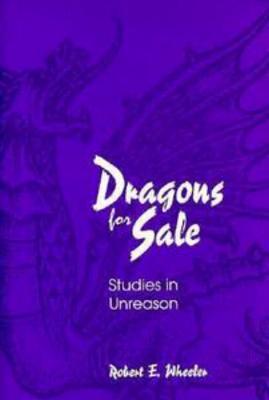 
Ships to Our Store in 1-5 Days
(This book cannot be returned)
Fear and ignorance have run rampant throughout human history, stifling creativity and unleashing unspeakable cruelty. Those sinister mythical dragons that have often stood in the path of truth and knowledge seem to return century after century as each new generation succumbs to its own insecurities, misled by those who would feed off the fear of others.
With great savoir vivre Robert E. Wheeler guides us through the many twists and turns of our many and varied foibles, all the while aiming the clear light of reason on the root causes of human misery. His compassion and insight, humor and lively command of the language combine to explore a gallery of "rancid ascetics"; "gloating sadists"; "pontificating hierophants"; "saints, gnomes, and rogues"; "spurious religiosity"; "swaggering unreason"; "oratorical hokum"; and "mystical ballyhoo"; as well as the "whiplash of mass emotion" and the "torrential madness of hysteria-dominated crowds" to arrive at a "fuller, richer, and more abundant life" in which we will "no longer tolerate the coexistence of natural affluence and spiritual squalor."
Guided by Wheeler's firm grasp of cultural history and modern psychology, Dragons for Sale exposes the roots of such mental maladies as witchcraft and its persecution, asceticism, and unbridled hedonism, the crusades and millenarianism, nazism's monumental conceit, and the tactics of McCarthyism, as well as the more mundane consequences of belief in nostrum vendors and bogus messiahs.