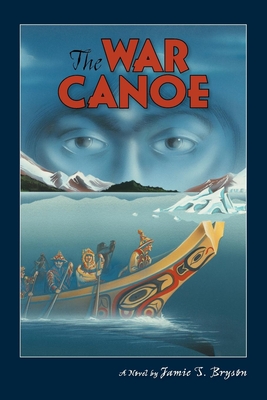 
Ships to Our Store in 1-5 Days
17 year-old Mickey Church, a Tlingit Indian didn't see anything special about his hometown. Perched on an island in Southeast Alaska, the small town of Wrangell was shabby, wet, and isolated. Mickey spent his time acting out, lighting up, and practicing his unstudied air of casual defiance. But when Dr. Bernet, the skinny, tenor-voiced new teacher gave his first history lecture, something inside Mickey shifted. Those old stories about the Tlingit people, the early Russian settlers, and American explorers began to resonate with the rootless orphan. It's a coming-of-age story about a boy caught between the ages. Should Mickey embrace the ways of his ancestors, or concentrate on finding his future in today's modern world? Set against the lush backdrop of Southeast Alaska, The War Canoe has its share of fistfights, bear attacks, and belly laughs. It is the perfect read for any preteen or young teenager who is at the crossroads of adolescence - or any adult who is looking for a little common ground.
Born in San Francisco and raised in San Diego, Bryson has been a journalist, flight instructor, commercial floatplane pilot and a blue-water sailor. He holds a journalism degree from the University of Alaska (1981). He worked at the San Diego Union for 12 years before moving to Southeast Alaska in 1970. He was editor and publisher of the Wrangell (Alaska) Sentinel and of the Petersburg (Alaska) Pilot, which he founded in 1974. From 1983 to 1988 Bryson and his wife and the youngest of his seven children sailed around the world from Alaska to Alaska in his 30-foot sailboat. He now lives in retirement in Colorado.

Mickey Church, just 17, is a Tlingit Indian who is a troublemaker in his small Alaska town of Wrangell. He discovers his own proud heritage, and the history of his town and people, as he sets out to build a traditional Native American war canoe. An extensive appendix includes actual military reports of the events that shaped Wrangells history. Bryson, a master storyteller, involves the audience from the very first page.  --- School Library Journal.

Selected by the Alaska Association of School Libraries "Battle of the Books" book list for 2011-2012,