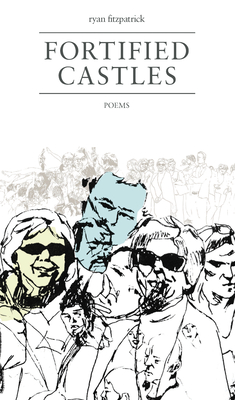 Starting with lyric statement as a point of interrogation, Fortified Castles asks what might cause retreat into the comforting walls of the self. Moving from a tickertape tableau of economic and environmental crisis to the difficulty of finding one another in the streets, these poems locate the Western subject between the ramparts it walks and the barricades it throws up.

Composed in three sections, Fortified Castles constructs a complex web of interpersonal disconnection from the anonymous detritus of our self-obsessed neoliberal moment. Written contemporaneously with the 2008 economic crisis, the first section, "21st Century Monsters," imagines a number of world-ending scenarios from the collapse of the environment to the collapse of capitalism to the collapse of culture, forming a questioning and questionable primer on the things that terrify us. The second section, "Fortified Castles," heavily recombines found material in a lengthy serial collage composed of multiplied and impersonal personal statements that add up in unanticipated ways, cascading in knee-jerk patterns of anxious hand-wringing and stubborn unreasonableness.

Written during the 2011 Occupy protests, the final section, "Friendship Is Magic," positions the hopeful connections of that moment beside the privilege rippling through it, interrogating the very real tension between working collectively and living comfortably.

ryan fitzpatrick is a poet and critic living in Vancouver. He is the author of Fake Math (Snare Books, 2007), as well as a dozen chapbooks, including the recent 21st Century Monsters (Red Nettle Press, 2012), shortlisted for the bpNichol Chapbook Award. While living in Calgary, he was an editor of Filling Station magazine and an organizer of the Flywheel Reading Series. With Jonathan Ball, he is co-editor of Why Poetry Sucks: An Anthology of Humorous Experimental Canadian Poetry (Insomniac Press, 2014). With Janey Dodd, he is in the early stages of organizing a comprehensive digital archive of Calgary small presses between 1990 and 2010. He is currently pursuing a doctorate at Simon Fraser University, where he works on contemporary poetics and the social production of space.