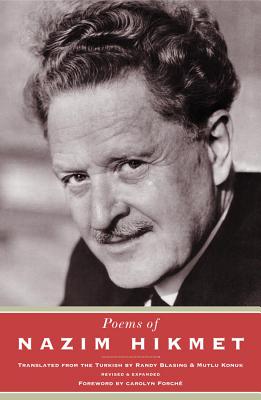 The definitive selection by the first and foremost modern Turkish poet.

A centennial volume, with previously unavailable poems, by Turkey's greatest poet.  Published in celebration of the poet's one hundredth birthday, this exciting edition of the poems of the Nazim Hikmet (1902-1963) collects work from his four previous selected volumes and adds more than twenty poems never before available in English. The Blasing/Konuk translations, acclaimed for the past quarter-century for their accuracy and grace, convey Hikmet's compassionate, accessible voice with the subtle music, innovative form, and emotional directness of the originals.

Nazim Hikmet is considered Turkey's greatest modern poet. For his Communist views, he was imprisoned in Turkey and his work was banned. His poetry has been translated into more than fifty languages. He won the World Peace Prize (the USSR's equivalent of the Nobel) in 1950. He died in 1963 in exile.

Randy Blasing, a former National Endowment for the Arts Translation Fellow, is the author of seven books of poetry, including Choice Words: Poems 1970-2005. He is also the eminent translator, alongside Mutlu Konuk, of the renowned Turkish poet Nazim Hikmet. He lives in Lincoln, Rhode Island.

Mutlu Konuk Blasing, a native of Istanbul, is Professor of English at Brown University. Her books include Lyric Poetry: The Pain and the Pleasure of Words. She is the co-translator (with Randy Blasing) of the renowned English translations of Nazim Hikmet, and the author of four scholarly books on American poetry.

Carolyn Forché, poet, translator, and activist, is professor of English at Georgetown University. She has published two award-winning volumes of poetry, Gathering the Tribes and The Country Between Us. In 1990 Ms. Fourché received a Lannan Literary Award, granted to poets and writers of literary excellence "whose work promotes a truer understanding of contemporary life." Her most recent volume of poetry is Blue Hour.
Brilliantly conceived and executed, witty and passionate, and inspiring in a sense not found in most modern poems.
— Booklist

One of the great poetic voices of all time.
— Multicultural Review