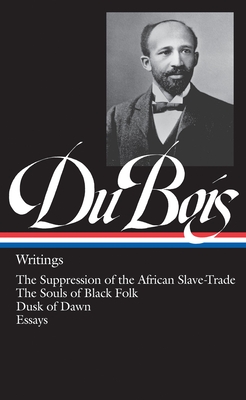 
Ships to Our Store in 1-5 Days
Historian, sociologist, novelist, editor, and political activist, William Edward Burghardt Du Bois was the most gifted and influential black intellectual of his time. This Library of America volume presents his essential writings, covering the full span of a restless life dedicated to the struggle for racial justice.

The Suppression of the African Slave-Trade to the United States 1638–1870 (1896), his first book, renders a dispassionate account of how, despite ethical and political opposition, Americans tolerated the traffic in human beings until a bloody civil war taught them the disastrous consequences of moral cowardice.

The Souls of Black Folk (1903), a collection of beautifully written essays, narrates the cruelties of racism and celebrates the strength and pride of black America. By turns lyrical, historical, and autobiographical, Du Bois pays tribute to black music and religion, explores the remarkable history of the Reconstruction Freedman’s Bureau, assesses the career of Booker T. Washington, and remembers the death of his infant son.

Dusk of Dawn (1940) was described by Du Bois as an attempt to elucidate the “race problem” in terms of his own experience. It describes his boyhood in western Massachusetts, his years at Fisk and Harvard universities, his study and travel abroad, his role in founding the NAACP and his long association with it, and his emerging Pan-African consciousness. He called this autobiography his response to an “environing world” that “guided, embittered, illuminated and enshrouded my life.”

Du Bois’s influential essays and speeches span the period from 1890 to 1958. They record his evolving positions on the issues that dominated his long, active life: education in a segregated society; black history, art, literature, and culture; the controversial career of Marcus Garvey; the fate of black soldiers in the First World War; the appeal of communism to frustrated black Americans; his trial and acquittal during the McCarthy era; and the elusive promise of an African homeland.

The editorials and articles from The Crisis (1910–1934) belong to the period of Du Bois’s greatest influence. During his editorship of the NAACP magazine that he founded, Du Bois wrote pieces on virtually every aspect of American political, cultural, and economic life. Witty and sardonic, angry and satiric, proud and mournful, these writings show Du Bois at his freshest and most trenchant.

LIBRARY OF AMERICA is an independent nonprofit cultural organization founded in 1979 to preserve our nation’s literary heritage by publishing, and keeping permanently in print, America’s best and most significant writing. The Library of America series includes more than 300 volumes to date, authoritative editions that average 1,000 pages in length, feature cloth covers, sewn bindings, and ribbon markers, and are printed on premium acid-free paper that will last for centuries.
William Edward Burghardt Du Bois was born in 1868 in Great Barrington, Massachusetts. After graduation from Fisk University, he earned his Ph.D. from Harvard, studied in Berlin, and became pioneering historian and sociologist and the founding editor of The Crisis, the official magazine of the National Association for the Advancement of Colored People. His major works include The Souls of Black Folk, Black Reconstruction, and The Suppression of the African Slave-Trade. His final years were marked by disillusionment with his native land, renunciation of his citizenship, and final self-exile in Ghana, where he died in 1963 at the age of ninety-five.