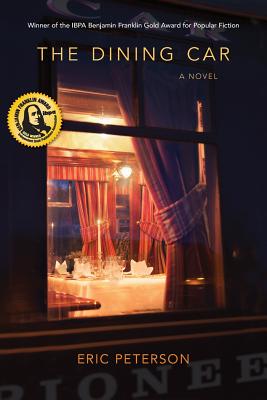 
Ships to Our Store in 1-5 Days
In his second novel, author Eric Peterson dishes up a riotous spectacle of self-absorbed chefs, backstabbing politicians, and devious publishing magnates, set against a backdrop of haute cuisine, presidential politics, and an endless supply of top-shelf liquor and wine. Fresh from a public humiliation and in search of his true calling, former college football star Jack Marshall enlists as bartender and steward aboard Horace Button's vintage private railroad car, the "Pioneer Mother," which is transporting the legendary food writer and social critic across the country in opulent style. Decked out in a white jacket, mixing perfect cocktails, Jack is immersed in a style of living --and dining-- he'd assumed was extinct. While striving to appease the eccentric, finicky Horace, and Wanda, the "Pioneer Mother's" enigmatic chef, Jack falls under the spell of Giselle Lebeau, a gorgeous celebrity chef whose designs on him test his self-control and his loyalty. But when tragedy rocks Horace's insulated white-linen world, Jack must take charge of a simmering stew of quirky yet powerful personalities -- all while staying in Wanda's good graces and keeping an eye on their newest passenger. A story of service, serendipity, and second chances, "The Dining Car" is more than a delectable read -- it's a marvelous, exuberant work of fiction.
A third-generation Californian, Eric Peterson attended the University of California San Diego (UCSD) and completed his Communication degree at Stanford. In college, he worked for Amtrak, getting a glimpse into the rarified world of travel via private railcar, and seeing a few impressive parties on the cars' open platforms. Peterson realized his dream of becoming a novelist in 2009, after years spent working for a venture partnership, founding a software company, and running a fine-dining restaurant. His debut novel, "Life as a Sandwich," was a finalist in the San Diego Book Awards. "The Dining Car" is his second novel.