The Actor's Other Selves: Subpersonalities as an Acting Approach (Paperback) 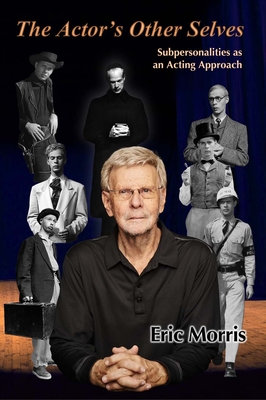 The Actor's Other Selves: Subpersonalities as an Acting Approach (Paperback)


Currently Unavailable
The Actor's Other Selves is the tenth book in a collection of texts that document the Eric Morris system of "experiential acting." This book is about SUBPERSONALITIES--what subpersonalities are, how they impact our lives and how we use them. It is exclusively written for actors. The journey of exploration starts with the origins and beginnings. Excerpts from books by Carl G. Jung, a Swiss psychologist who explored archetypes, are followed by the use and description of behavioral examples of personalities. The theory is then examined: who are the selves, how were they created and how do they function? The exploration continues with a technique that I created many years ago: THE ELEVENTH LEVEL OF CONSCIOUSNESS, which is totally explained. Then comes EXPERIENCE HUNTING--CHOICE HUNTING, detailing the various approaches used to find experiences and choices that can be used in one's acting. In the next section of the book, which is a very large section, I detail specifically the approach techniques for accessing subpersonalities, which are VOICE DIALOGUE (a complete example of the process is given), WRITING IN JOURNAL FORM OR USING A TAPE RECORDER, USING MOVEMENT AND DANCE, USING ART AND DRAWING, USING CHOICES, USING MUSIC, AND ROLEPLAYING. All of those techniques and the approaches to them are explained in specific detail. In EXTERNALS I describe what that approach is and how to use it to access various subpersonalities. Externals is a "megapproach" and an important part of my work. A megapproach is such a powerful technique that it could be used as a total acting system. Externals is a process that includes getting a sense of animals, people, insects and inanimate objects and then translating that energy into human behavior. This technique is very impacting on eliciting various subpersonalities. The last of this group is IMAGING, also a megapproach. The next section explains HOW YOU KNOW WHEN YOU ARE INHABITED BY A SUBPERSONALITY. The actor must be able to distinguish between really inhabiting the energy of a subpart and faking it The DAILY SUBPERSONALITY INVENTORY is an exercise the actor should do on a daily basis to be able to identify the difference between a mood swing and a subpersonality. The section on RESEARCHING THE CHARACTER explains how to identify the different character elements and find a subpersonality to fulfill those components. All of that is followed by a section about going back to historical events, such as the Second World War or the post-war years and exploring characters in plays and films of those periods, giving examples of the subpersonalities each of those characters might be impelled by. Characters in many other plays and films are cited, with step-by-step descriptions of how subpersonalities can be used to fulfill them. An important section of the book is a concept I have been experimenting with for some time: EXPLORING THE MULTIPLE FACETS OF A SUBPERSONALITY. This has never been approached in any previous subpersonality study, and I feel it to be a revolutionary concept. Continuing the journey through the book, we find sections on BEING TRAPPED IN A SUBPERSONALITY without any awareness that it is so, BONDING PATTERNS and how they affect relationships when there is no consciousness or ability to release oneself from the trap, and HOW TO DISCOVER YOUR DISOWNED SELVES, a very important involvement and a process which is explained in that section of the book. The last section, on DREAMS AND DREAMING, explains what and how subpersonalities invade your dreams and what they want. There is a whole list on how to invite dreams as well as on dream catching and lucid dreaming. The four examples of dreams in this section are all real dreams of the author of this book, who interpreted them as relevant to what energies or subpersonalities had invaded the dreams and what conclusions he had come to.