Chili Pimping in Atlantic City: The Memoir of a Small-Time Pimp (Paperback) 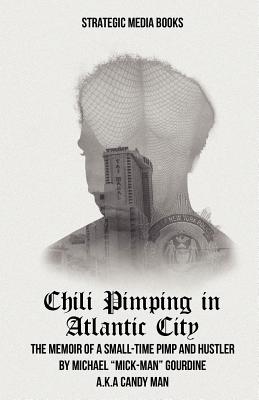 Chili Pimping in Atlantic City: The Memoir of a Small-Time Pimp and Hustler, the controversial autobiography of Michael Mick-Man Gourdine, AKA the Candyman, as he was known on the street. The book pulls no punches and provides an honest and sometimes shocking look at what one man from the wrong side of tracks felt compelled to do to achieve the American Dream. Gourdine became a pimp who operated primarily on the streets of Atlantic City, New Jersey, while working as a corrupt NYPD cop who specialized in narcotics trafficking and prostitution. Employed as a police officer from 1990 to 2000, Gourdine reportedly made an estimated $2.5 to 3 million dollars in illegal graft, bribes, prostitution and drug dealing before being fired. Gourdine was a chili pimp-that is, a small time pimp who had between one and three girls working for him. As a chili pimp, Gourdine didn't stay in the most expensive hotels or eats in the most expensive restaurants; he couldn't afford it. Instead he relied on is his ability to give his girls more care, attention and on-the-spot dependability than a bonafide pimp could give. Today, Gourdine recalls, "It is a sad existence that I was lucky enough to escape and maybe some readers will avoid after reading my book." Chili Pimping in Atlantic City describes how Gourdine developed the stomach for the pimping game, became a corrupt cop, learned the pimping trade and survived on the mean streets. The author paints vivid profiles of some the interesting characters he meets along the way. He concludes with some hard lessons. "The best way to steer a young boy away from pimping is to change his environment," Gourdine writes. "If a young boy is starving, living without heat in his house, with no real men around him, guess what he's going to take when he sees the first person who he deems the best fit to survive in his dismal circumstances? And believe you me, he will not be a law abiding citizen." Gourdine now resides somewhere in New Jersey where he owns and manages numerous properties, and changes residences often. He is married with four sons.