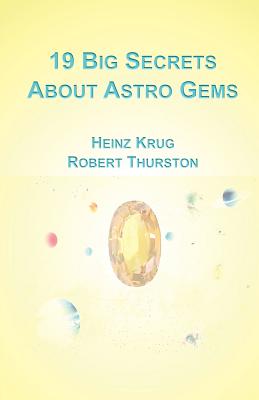 
Ships to Our Store in 1-5 Days
(This book cannot be returned)
"19 Big Secrets About Astro Gems" is a book about gem crystals in the context of an ancient system of astrology--the science of jyotish, which has existed in India since Vedic times, extending back at least 5,000 years. The authors, Dr. Heinz Krug and Dr. Robert Thurston, with a background in both the physical sciences and Sanskrit studies, have made an extensive study of jyotish and bring out that it correlates with cutting-edge studies in physics and genetics, and contains a highly practical technology for improving people's lives. The authors reveal a technology to utilize the discovery made by Fritz Popp and others that the physiology absorbs and emits light in very specific frequencies. They utilise jyotish, which can be translated as light, to distinguish those specific frequencies. So, gems and jyotish become the tools not only to illuminate the unfolding destinies of individuals, but also to change these destinies for the better. Gems are used to influence the frequencies of light coming into the bodies' quantum light fields, facilitating cell repair and allowing for higher levels of function. This is a practical manual more than a theoretical treatise. Krug and Thurston explain the difference between jyotish and western astrology, the degree of accuracy required to produce an individual birth chart, and the significance of an individual's physical location on Earth in influencing health and prosperity. They explain the relationship of individuals with our planet's quantum energy fields and how gems, when properly selected, filter white sunlight, selecting those frequencies that balance the individual's energies with these fields. Very importantly, they bring out that lab-created gems, as they are far purer and are able to trigger laser light, are most valuable for use in this technology. They are also more affordable than mined gems, and obtained without cruelty or hardship, The authors touch on the details of correct gem selection and usage, including the pitfalls to avoid, and how to achieve the long-term goals of personal fulfillment and, ultimately, enlightenment.