The Heart of All That Is: Reflections on Home (Paperback) 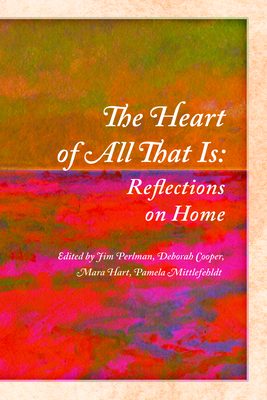 The Heart of All That Is: Reflections on Home (Paperback)

This engaging anthology on the theme of home includes twenty personal essays and nearly eighty poems from a wide variety of social and cultural perspectives, as unique and diverse as the authors who have written them. Herein is previously uncollected writings by Joseph Bruchac, Jane Yolen, Marge Piercy, Naomi Shihab Nye, Roberta Hill, Mark Vinz, and many others.

In a world of increasing change and mobility, these writings explore our most fundamental concerns for self-identity: what is our home, where have we come from, who am I?

From The House Made of Words:

Some day I will havea house made of words.It will be all windows and doors, with the words placed in rows, each one leading to the next, the way the presentwears the face of the past.

Jim Perlman is the founding editor and publisher of Holy Cow Press.

Deborah Cooper is the author of Under the Influence of Lilacs (Clover Valley Press, 2010). She is the 2012-14 Poet Laureate of Duluth, Minnesota.

Mara Hart writes memoir in prose and poetry. Her book, Lovecraft's New York Circle, was published in 2007 by Hippocampus Press.

Pamela Mittlefehldt is a poet and mystery writer. She is working on a collection of essays about the meaning of place.

JIM PERLMAN's first home was in Minneapolis where his interest in poetry began in high school. In 1977, after editing various local literary magazines, he founded Holy Cow! Press. He edited the poetry anthology Brother Songs: A Male Anthology of Poetry (1979) and, with Ed Folsom and Dan Campion, co-edited Walt Whitman: The Measure of His Song (1981, rev. ed., 1997). He and his family moved to Duluth, Minnesota in 1988, where he co-founded the Spirit Lake Poetry series, and helped establish the Duluth poet laureate project in 2005. With co-editors Deborah Cooper, Mara Hart, and Pamela Mittlefehldt, Beloved on the Earth: 150 Poems of Grief & Gratitude was published in 2009. DEBORAH COOPER has been writing poetry for over twenty years and has worked collaboratively with visual artists, musicians and dancers. She and her husband, Joel, who is a printmaker, have exhibited their collaborative images throughout the Midwest. Deborah co-edited the anthology Beloved on the Earth: 150 Poems of Grief & Gratitude (Holy Cow! Press) and she frequently teaches writing classes for those who are grieving the loss of a loved one. She also teaches Sacred Poetry classes, and mentors inmates at the St Louis County Jail. Deborah is the author of five collections of poems, most recently Under the Influence of Lilacs published by Clover Valley Press. She is 2012-2014 the Duluth Poet Laureate. MARA HART has been a university librarian, has taught English and Women's Studies at the University of Minnesota, Duluth, and has been a poetry editor of three literary periodicals. She writes memoirs in poetry and prose, teaches memoir writing, edits, and mentors writers. She edited Lovecraft'sd New York Circle published by Hippocampus Press, New York, in 2007, and was a co-editor of Beloved on the Earth, published by Holy Cow! Press. Her most recent book, So Many Lovely Days, was published by Kirk Press in 2013. PAMELA MITTLEFEHLDT is a poet, writer, editor, and fiddler who has found home in Duluth, Minnesota. She is Professor Emerita of American Studies/Community Studies at St. Cloud State University, where she taught courses on place, diversity, sustainable communities, and creativity. She is revising a mystery, working on a collection of essays about the meaning of place, and beginning a cross-genre project on the body as place. The focus of her work is on the power of story to transform our lives as individuals and as communities.