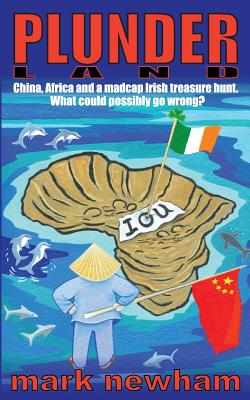 PLUNDERLAND is the story of Ireland's colonisation of Africa.

Not really. It's about China's.

But there is a connection. Ireland's answer to Stanley and Livingstone have something China wants and will pay any price to get. Without it, Africa's latest colonial invader will never become undisputed master of the universe.

How though to seal the deal? Hopelessly out of their deal-making depth and teetering precariously on the edge of financial ruin, Kearney and Ryan know this could be their Waterloo. Get this one wrong and they'll likely never see their homeland again.

But get it right and they'll be home free. Out of Africa at last to enjoy the fruits of their dubious exploits at their leisure.

In Africa so long they're becoming choc-ices in reverse, this, they're under no illusion, is their final throw of the fortune-hunting dice. Africa has had the best of them and both know this is their last hurrah. Their last chance to atone for a lifetime of failing to unearth the crock of gold they came to Africa to find.

So this time things have to be different. This time uncharted depths have to be plumbed. This time both know they have to break the habit of a lifetime and do some planning.

Unable to recall when watertight was last used to describe a Kearney/Ryan money-making escapade it's a tough ask.

But finally they're ready.

In their hands is a plan covering every base, foreseeing every eventuality, envisaging every likely Chinese scamming angle.

With every possible route to disaster closed off what could possibly go wrong?

CAUTION: PLUNDERLAND IS AFRICA IN THE RAW. CONTAINED IN ITS PAGES IS SOMETHING TO OFFEND EVERYBODY. SO THOSE OF A SENSITIVE DISPOSITION MIGHT CARE TO LOOK AWAY NOW. OTHERWISE... ENJOY