The Most Interesting League In the World: How the NFL Explains America (Paperback) 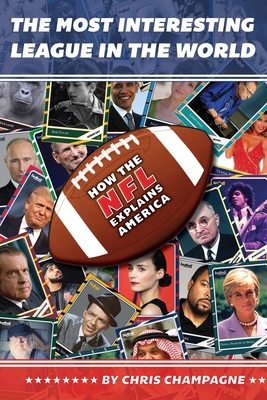 The Most Interesting League In the World: How the NFL Explains America (Paperback)

YES, In THE MOST INTERESTING LEAGUE IN THE WORLD you'll find stories linking this eclectic group to the NFL in surprising and interesting ways.

And a few cameo appearances by Queen Elizabeth, Pope Francis, Muahammad Ali among others in this unique look at the history of the National Football League.

Along with other tantalizing facts from the worlds of ...

Even the animal kingdom represented by an alligator, a gorilla, a shark, a monkey, chickens, pigeons, a goat and a gentleman chimpanzee and more.

And 6 count'em, 6 tales about curses.

Stories about an astronaut, a hangman, an alleged hit man and a couple of murders thrown in here and there.

Altogether an array of tales that should pique the interest of every football fan and those who are not so familiar with the game in what may be the most unique book on pro football EVER..