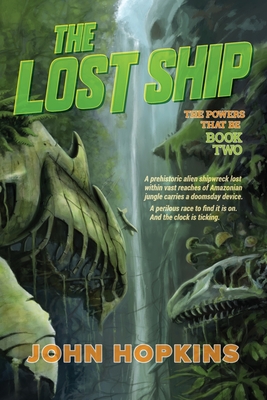 An ancient Gray race time travels to the present after a humiliating Cretaceous-era colonization failure, seeking to recover and detonate a world-killer superweapon abandoned on a 90-million-year-old shipwreck lost to time in what is now the Amazon's vast unexplored reaches.

Book Two in The Powers That Be Trilogy, THE LOST SHIP, immerses readers in the day-after chaos, carnage, and confusion following the near-apocalyptic ending of THE GOLDEN ELLIPSE.

An offer they can't refuse: Rachel and Owen Haig convalesce in a decimated Cairo hospital following their death-defying heroism beneath the Giza Plateau, contending with unwanted notoriety and a job proposal from The Powers That Be.

The fourth kind: A battlecruiser from the time-traveling Gray's fleet seizes Agent Flynn's lunar-bound medevac, imprisoning the crew in a mind-bending nightmare where startling revelations materialize from the terrifying shadows.

Never let a disaster go to waste: Griffin Pike, a megalomaniacal tech mogul, schemes to project international anger onto the only entity athwart his new world order master plan: The Powers That Be. Leaving nothing to chance, Pike's failsafe manifests in cryptic clues within the ink-splotched pages of a worn leather-bound notebook leading to a doomsday device concealed deep in the Amazon.

THE LOST SHIP twists and turns through post-invasion ruins, culminating in a supernatural confrontation deep in the heart of the unforgiving Amazon wilderness where fates are sealed, and humanity's destiny illuminates in a cerulean glow.

Stay tuned for THE BLUE SPARK, the epic conclusion to The Powers That Be Trilogy.