Someone I Love Has ALS: A Family Caregiver Guide (Paperback) 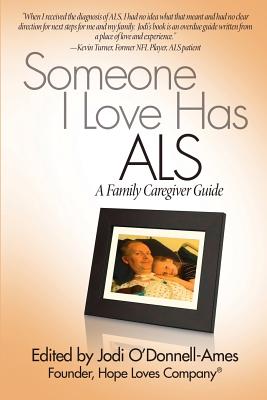 Someone I Love Has ALS: A Family Caregiver Guide (Paperback)


Ships to Our Store in 1-5 Days
(This book cannot be returned)
Kevin and Jodi O'Donnell, were a young New Jersey couple busy raising a toddler and making plans for their future when they received life-altering news in 1995 that changed everything as they knew it. Kevin was only 30 years old when he was told that his health problems were the result of a rare, terminal disease called ALS (Amyotrophic Lateral Sclerosis), or Lou Gehrig's disease. Kevin and Jodi had not heard of ALS until then and had no idea how those three letters would challenge everything they thought to be certain. After more than 20 years of working with ALS families, Jodi realized that more information and better resources could be available to help families who are coming to grips with the challenges of the disease and the caregiving responsibilities that are involved. In the Introduction to "Someone I Love Has ALS: A Family Caregiver's Guide", Jodi recounts the journey she took as a caregiver, advocate and writer and embraces and shares the lessons learned throughout the pages of this wonderful guide, "This guide was created by a variety of caregivers and professionals who have years of experience with various aspects of ALS. It was written by volunteers and experts who care about ALS and your journey. It is the resource that I wish we had received along with the shocking diagnosis." Although Kevin died of ALS in 2001 at the age 35, the disease never won the battle. ALS only strengthened Kevin and Jodi's love for God and each other and it created an even bigger purpose and plan: the creation of Hope Loves Company(R), the only non-profit whose mission is to support the children and grandchildren caregivers of PALS (people with ALS).