From Sand and Time: Poems (Paperback) 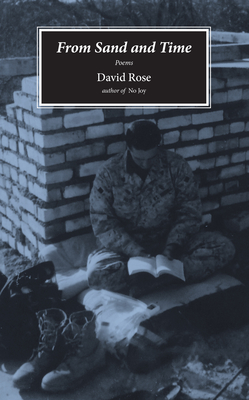 From Sand and Time: Poems (Paperback)


Ships to Our Store in 1-5 Days
Winner of the Marine Corps Heritage Foundation Robert A. Gannon award for Poetry The first official poetry installment in David Rose's unique blend of tenderness and morbidity, From Sand and Time engages a cataclysmic self-reflection coming with the complexities, times, and demands of the wars in Iraq and Afghanistan. An evocative collection of rhyme and free verse, From Sand and Time weaves through ambition and belief, doubt and loneliness, deployment, combat, and what waits thereafter.

David Rose was born and raised in Orlando, Florida. He served in the United States Marine Corps from 2002 to 2006, mostly as a Reconnaissance Man in 2nd Reconnaissance Battalion; under which deploying to Iraq in 2004. This era encompassed the first democratic elections held in Iraq and the retaking of Fallujah. All this in the most violent battle space of the war, the Al Anbar Province―the Triangle of Death. He holds a Bachelor of Art in Business Administration from American Military University as well as a Master of Science in Philosophy of the Social Sciences from the London School of Economics and Political Science.