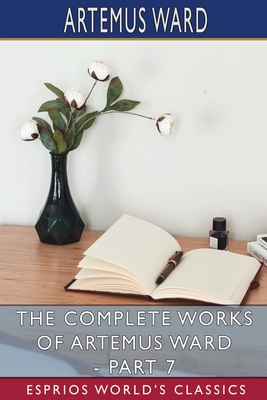 
Ships to Our Store in 1-5 Days
Charles Farrar Browne (April 26, 1834 - March 6, 1867) was an American humor writer, better known under his nom de plume, Artemus Ward, which as a character, an illiterate rube with "Yankee common sense", Browne also played in public performances. He is considered to be America's first stand-up comedian. His birth name was Brown but he added the "e" after he became famous. Browne was born in Waterford, Maine. He began his career as a compositor and occasional contributor to the daily and weekly journals. In 1858, in The Plain Dealer newspaper (Cleveland, Ohio), he published the first of the "Artemus Ward" series, which, in collected form, achieved great popularity in both America and England.