A Diamond for Her: Myths and Tales of the Winasook Iron Horses (Paperback) 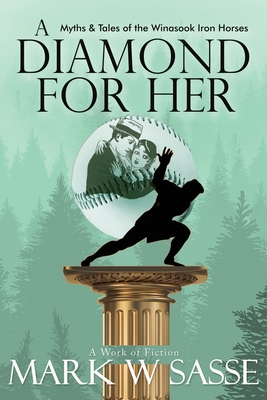 He loved her enough to build her a baseball stadium.

With a tip of the cap to the works of W.P. Kinsella, A Diamond for Her is a historical and magical story of love between two people - Raymond & Rochelle - and two grand institutions - America & baseball.

In 1920, railroad man Raymond Blythe had a series of disturbing dreams-giant creatures with Greek names playing baseball. He was determined to find out what they meant. The dreams set him on a bizarre quest to find a connection between Iowa, Theodore Roosevelt, baseball, and his deceased father. While searching for answers at the Carnegie Library in Pittsburgh, he met a young librarian named Rochelle Christy. This meeting sets him on another quest-to win her hand in marriage even if it means he has to establish his own baseball league in Pennsylvania's Allegheny Mountains.

A Diamond for Her chronicles the fictitious history of the Winasook Iron Horses, who were the founding members of the Allegheny Independent League from 1921-1955. Baseball magic was born in these mountains proving time and again that anything can happen inside the diamond. Included in these remarkable stories told by retired doctor Charles "Shoeshine" Henry are:

Henry, through extensive interviews and archival research, chronicles the historical record of the Blythes and their remarkable team the Winasook Iron Horses and in doing so, gives a sweeping view of American history through the steady eye of America's pastime.